Holding the Hands of Angels by Brian Moses, review by Lynda Waterhouse 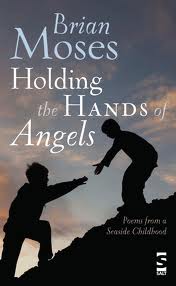 Last Tuesday evening I attended the CLPE 2012 Poetry Award Ceremony. After sampling the delicious canapés I headed for the book table and before the proceedings had begun found myself on impulse buying Brian’s book.
I had been taken by the appearance of the book. It has a dark cover depicting two boys in shadow. The sun is setting with dark brooding clouds. One boy is standing on top of a hill reaching out a helping hand to the boy below him. It wasn’t the usual bright cartoonish cover that adorns so much of children’s poetry books. And yet the dreaded age banding on the back said 7+. I was intrigued. I picked up the book. It was small and light and hard to let go of. I could easily imagine it in a child’s hands.
The blurb on the back informed me that this was a recollection of his childhood in the 1950s and 1960’s.
Nostalgia for me and history for children then? Was that all there was to it?
I sat in the garden and started to read. Usually I am a dipper of poetry books but I read each poem in order. The selection of the poems has a narrative feel as you accompany the boy as he takes his tentative steps towards growing up and goes from climbing walls to kissing girls with unsettling encounters with bullies and heartless teachers in between.
I loved the nostalgia that such poems as Fire, The Bonfire at Barton Point, Tall Stories and Tortoise invoked in me. As a child I always envied someone who had a tortoise in their garden and still suffer pangs of guilt about the terrapin I insisted my Mum bought for me and that we tried to keep in a biscuit tin. I could imagine teachers having fun reading out these poems to their classes and generating lots of discussion. I found the trilogy of bully poems very affecting. Although I do think these poems would be better suited for 9+.
I found the characters of Mum and Dad that cropped up throughout the poems both humorous and touching,
Dad was a ‘wait and see’ man
and sometimes it seemed an eternity,
all those times I waited and saw
whether what Dad had finally decided
was what I was hoping for.
These poems are relevant to children now and despite the lure of technology, if given the chance, children are still led by their imaginations just as they were in the 1960’s. And I hope their imaginations will lead them to this collection
Holding the Hands of Angels is published by Salt Publishing
www.saltpublishing.com/kids/
p.s Congratulation to Rachel Rooney for winning with her debut collection The Language of Cat

Lovely review, Lynda. As a child of the 1950s myself, I want to read this. And what a beautiful cover!

Yes, a lovely review - thank you. I'll away to amazon now to order it...

Welcome to the Sssssnake Hotel said...

Thank you for this terrific review. So glad you enjoyed the book. Am currently writing my childhood autobiography - filling in the gaps between the poems.

Just returned from holiday so am late responding. Look forward to the autobiography Brian.