Lucie is looking forward to Uncle Joe's visit, because he always brings a present, and this time, Mum assures her, it's going to be an even more exciting gift than usual. But when she sees it, Lucie can't believe her eyes: although no-one else seems to have noticed, she can see perfectly well that it is in fact a wolf. 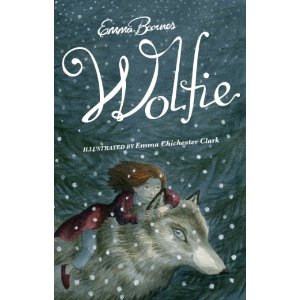 At first she is frightened by its size, its sharp teeth and its cold blue eyes. But that night, when her parents are asleep, she finds herself drawn to it, and she creeps downstairs, even though she recognises 'that it was probably not a very sensible thing to do, to go all by herself to see a wolf.' For a moment, wolf and child gaze at each other in silence. Then Lucie greets the wolf - and it greets her right back! For this is a magical wolf - it can talk. There's nothing cuddly or twee about it; it remains powerful and sometimes alarming. But it's articulate and intelligent - and it treats Lucie like a sensible person - like an equal. It listens to her and answers her questions directly - unlike all the adults in the book, who only see what they expect to see and hear what they think they're going to hear. So, when Lucie takes Fang to the park and a small boy declares that the 'dog' is a wolf, it's easy for her to distract the adults by laughing at the idea. She can't believe she's got away with it, and asks Fang later if she used her magic powers to protect herself. '"No," said Fang cheerfully. "It wasn't magic. It was just what you said. They decided they couldn't have seen something, so they didn't."'

The adults are generally unobservant, They don't notice either that Lucie and the boy who lives next door, Marcus, are arch-enemies. Both sets of parents congratulate themselves on how nice it is for the children to have another child next door, and neither they nor the teachers notice that Marcus does his best to make Lucie's life a misery, particularly at school. (And you can see where he gets it from: when Marcus asks his mother if he can have a dog, she snaps, '"Horrid, smelly, messy creatures...Pooing everywhere. Shedding fur: I hate them. Almost as much as I hate children..."' ) Lucie stands up for herself, but all of a sudden, she finds she has two allies: not only Fang, but a boy in the year above, Alex, who is fascinated by Fang, and also sees no reason why Lucie should be bullied for having red hair (and just because she's a new girl) - particularly as he has red hair himself. Alex and Lucie become friends.

So all is going well until Fang rescues Alex's little sister when she runs across the road in front of a car. At first, the wolf is a heroine, but notoriety proves to be a disaster: people start to notice that she's no ordinary dog. Soon, she's under threat, and Lucie has to work out how to save her.

This is a terrific story. The characters are well-rounded and appealing; it's funny, it's exciting, and it's beautifully written. It also makes you think - about how people ignore the evidence of their own senses, about the effect humans have on the environment, about standing up to bullies. But all of that comes through the story: it's not an obtrusive add-on.

The book is beautifully produced, with clear print and lots of space, and with a gorgeous cover and illustrations by Emma Chichester Clark. And it's good to read a book for this age range (7-10) which, although it has a touch of magic, has its feet planted firmly in the real world.


Return to REVIEWS HOMEPAGE
Posted by Sue Purkiss at 09:48 Permalink

Looking forward to reading it!

Thank you so much for such a wonderful review - Wolfie is a book that meant a lot to me, and it is great to see that the elements I enjoyed writing about most, seemed to have worked for you too.