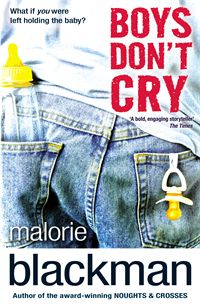 Dante is a bright young lad anxiously waiting for his A Level results.  He knows what he needs to get into his chosen university, but will he do it?  Did he do enough work?  It’s a big ask, but he thinks he should have done it.  Then he’ll be able to leave the home he shares with his annoying younger brother Adam and his virtually estranged widower dad.  It’s all he wants.

But, instead of his results, a girl arrives on his doorstep.  Someone he hasn’t seen since he split up with her a while ago.  They were only sixteen at the time and it was never serious.  They had one fumbling attempt at sex when they were both very drunk at party.  Now she’s on his doorstep, holding a baby.  And the baby is his.

This brilliant opening hooks you right in and keeps you there as Melanie asks him to look after the baby while she goes to the shops.  The terror of those fifteen minutes alone with a baby, who may as well be an alien, are brilliantly portrayed.  As is the shock when Melanie calls to say she’s not coming back and it’s his turn to look after his daughter.

Dante’s world is completely torn apart by the arrival of baby Emma.  The portrayal of the realisation of how hard it is to look after a baby is brilliant, plus the realisation of how much Dante’s dad must have done for him when he was too small to remember.  Then there are all the issues of him being left with a baby he has no feelings for, apart from terror.  And he’s supposed to be going out with his friends to celebrate results . . .

Meanwhile, his younger brother Adam has his own story to tell, his own problems and own terrible disaster.  It’s a funny, sad, uplifting book about the importance of family and I’d recommend it to all teens as well as their parents!


Return to REVIEWS HOMEPAGE
Posted by Jackie Marchant at 08:57 Permalink

I'd really enjoyed this book too, especialy the way that his values gradually change as well as the role of Dante's own father in helping him to come to terms with it too.