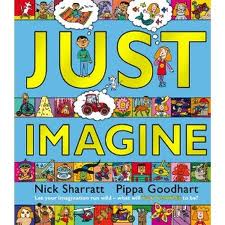 The picture book “JUST IMAGINE” came through the post at just the right time. The two small people staying here rushed to it as a treat as soon as the cover appeared from the cardboard wrapper.

During the week of their holiday, Daisy (8) read it to herself. Then she read it with Milo (6) and then they took turns at reading it, singly or together, on the sofa, on the floor, and in their beds.

Both children read stories way beyond the simple text, speech and thought bubbles found inside these pages but they both took delight in this book.. Ah yes! Time to reiterate that picture books reading isn’t just for Nursery and Reception Classes. Older children benefit from time spent enjoying and relaxing with picture books too!

JUST IMAGINE is what I’d call a very sociable book. The overarching idea and the size and layout of the pages are clearly meant for sharing and talking over as much as they are for private daydreaming, whether between child and grown-up or among a small group of children.

The main premise is posed by Pippa Goodhart’s easily read and remembered rhyme, reaching across all the pages. What would it be like, JUST IMAGINE asks the children, if they were really big? Or really small? Or invented a machine? Or lived at another time? Or were characters from stories? Or animals? Or if they lived somewhere very different?

Every spread has plenty of illustrations – twenty-two on both the first and second spreads – each encouraging the child to imagine what would happen if they found themselves in different situations. Some spreads have lots of “individual” illustrations while others offer a crowd of ideas, almost “where’s wally-style”, suggesting answers in the cheering Nick Sharratt style.

Don’t just take my opinion. Here's what Daisy told me:

“I liked it a lot. The main thing I liked about it is that it really gets your imagination going. There are some really funny bits and some strange bits and all sorts of different bits. Also it had quite a nice ending to it. And also instead of telling you “it should be like this” or “it happens like that” you choose for yourself.

It could be for quite young people and would be good for kids who’ve just learning to read – it is mainly pictures - but it’s still quite nice for older people like me.”

Thank you for you help, Daisy.
(Milo agreed with all that she’d said.)

This title is a follow-on from “YOU CHOOSE”, a book that was a classroom favourite as well as "Mumsnet Book Of the Year 2011 for 3-4year olds". JUST IMAGINE would – she said, finding her teacher hat – offer lots of opportunities for language learning, vocabulary building and conversation in schools.

JUST IMAGINE is out tomorrow in hardback, which may be what you'd need for the tough use that the book is likely to get on the classroom carpet.


Return to REVIEWS HOMEPAGE
Posted by Penny Dolan at 04:42 Permalink