The Sons of Rissouli by Matt Cartney; reviewed by Gillian Philip 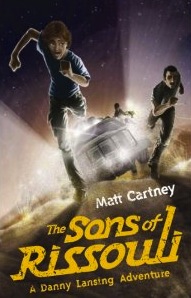 Matt Cartney and I share a publisher, so I'm well aware that I'm running behind and that Book Two of Danny Lansing's adventures was published in July. That one - Red, White & Black - is the one I should be reviewing. But as usual, I'm playing catch-up – and not being a tenth as adventurous as Danny, I wanted to read his first escapade before striking off into new territory. I think, on the basis of this one, I can safely recommend them both.

I picked up The Sons of Rissouli partly because of the cover; as well as a publisher, Matt Cartney and I share a cover artist in the talented Lawrence Mann. This one – strikingly kinetic – looked like exactly the kind of book I'd have loved to read as a child. When I was ten, there weren't nearly enough children's contemporary thrillers involving desert chases, gun runners, exploding warehouses, narrow escapes from vicious criminals, and wily kids saving the rumps of more responsible adults.

Not that Danny's Uncle Angus is especially responsible: in loco parentis after the death of Danny's mother and father, he's a risk-taking investigative journalist who isn't keen on giving up his adrenalin-fuelled lifestyle. Since Danny has always considered Angus impossibly cool, he is more than willing to fall straight into that lifestyle when the summer holidays coincide with a tip-off about a criminal gang of arms smugglers in North Africa.

In a hackneyed but useful term, this is a Boys' Own adventure, though I see no reason why it shouldn't appeal equally to girls. There were moments when I wanted to kick Angus solidly in that imperilled rump of his, but that was just a mother's perspective. I've no doubt that children will relish the notion of an uncle like this, every bit as much as Danny does. (I just wouldn't want him looking after my kids.)

Luckily Danny proves himself resourceful at an early stage, and very courageous later on. The first part of the book involves a lot of travelling, and rather a weight of detail about the countries Angus and Danny drive through on their way to Morocco – but there's some lovely description and an evocative sense of place(s). You can feel and smell each country vividly, and watching the landscape change through Danny's eyes does give you a sense of his dislocation – and his swiftly widening horizons.

When they arrive in the Sahara, though, the pace doesn't half pick up. As soon as Angus and Danny collide with the savage and ruthless Sons of Rissouli (sometimes literally), the story becomes a race against time, with our heroes facing bullets, car chases, kidnapping, torture and some spectacular explosions. The climax is proper James Bond stuff, and I loved it.

The Sons of Rissouli is that delicious mixture: a terrific old-fashioned yarn set firmly in the contemporary world. The villains are properly villainous, the heroes courageous and clever, and the supporting cast nicely drawn (I confess I fell harder for the gruff Chief Inspector Newby than I did for Angus; who couldn't love a man who still uses the expression 'hush-hush'?). Danny himself is a great young hero, with a dry interior voice, and he can be beautifully sarcastic – but despite his insolence and his doubts, he's got a strong moral core. His loyalty to his not-quite-bulletproof uncle extends to risking his life for him.

He's a boy who takes on a brutal gang of gun runners with "little more than a Swiss Army knife and an exhaustive knowledge of The Simpsons." I'm looking forward enormously to his next adventure.

Return to REVIEWS HOMEPAGE
Posted by Gillian Philip at 00:02 Permalink

Sounds just the sort of book that children really enjoy reading - and Danny Lansing the kind of boy they either want as a best friend or want to be themselves.

I suspect that young readers can tolerate "the weight of information" alongside a spiffing yarn as they are often keen on knowing things so - with the vivid descriptions you mention - this adventure sounds as though it meets both reading needs. Thanks, Gillian.

Thanks Penny! The other thing Matt Cartney is great on, description-wise, is the kind of details you always want in a thriller, and I think kids will love those too - for instance, I now know how best to drive up a sand dune and pick a lock! It's all really good Boys-Own (Girls-Own) stuff!

What a recommendation! Reading AND useful life skills in one. Seriously, it always feels good to come out of a book knowing more than you did before - at several levels.

I've always wanted to know how to drive up a sand dune. As for lock picking, I've always remembered and Enid Blyton hint on how to getout of a locked room (if you happen to have a sheet of newspaper and a pencil, and your captor has left the key in the lock...)