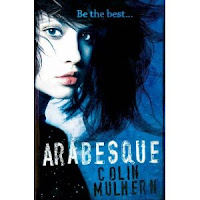 This novel is a Young Adult crime novel. It's a genre that's reaching more and more readers, thanks to pioneers in the field like Anne Cassidy and Celia Rees. I'm delighted that it should be so, because I love any kind of mystery, from the traditional detective story to the more gritty stuff that takes you into the heart of a crime in ways that Agatha Christie would never have considered. It's true, I think, that any young person of say, 14 and above who has developed a taste for this sort of book will be reading a great deal of adult crime fiction but that's no reason for writers such as Mulhern to desist. In fact, a book such as 'Arabesque' is probably a good way to get slightly younger teenagers hooked on the genre and once addicted, they can then go on to all sorts of other, more challenging territory.

This book has two qualities which make it ideal for the purpose. It has great readability and once you begin, it's hard to lay the story aside. It concerns two young girls who are promising gymnasts. Amy May in particular is clearly the stuff of which champions are made. But she and her friend Mia are kidnapped and held separately from one another. We follow the adventures of each girl in turn. Mia ends up in a rather unusual kind of brothel (but descriptions around this are never too explicit) and Amy May is in the belly of the beast, so to speak, with the ringleader of the whole kidnap and his gang.

It would be wrong to give you more details of the plot, but I will say that it twists and turns most satisfactorily all the way to the end, which comes out of the blue and is a huge shock, to say the least! I recommend this book to anyone who likes a fast-moving, involving, and exciting read. The best thing about it is: we like and sympathise with the main characters and we care what happens to them. I really enjoyed reading Arabesque and I just hope the appropriate but rather balletic title and the moody picture of a girl on the front cover won't put off the boys too much. They would like it too.