Josh was published in 1971, and won that year’s Carnegie medal, but until I came upon a copy in a charity shop I’d never heard of it. And I really should have done - and so should you - because it is a terrific book. 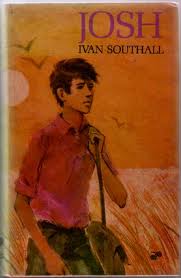 Josh Plowman arrives to stay with his great-aunt in the little town of Ryan Creek - his ancestral home, in a sense, for the Plowman family is long-established and respected there, though Aunt Clara is the only one still resident.
But the reputation of the Plowmans is to weigh on Josh in more ways than one as he finds himself unexpectedly drawn into conflict with some of the local kids, in particular the bullish Bill O’Connor, his sly brother Rex, Harry Jones, and Harry’s simple yet craftily manipulative sister Laura, all of whom in their own way expect the wrong things of Josh and then go out of their way to achieve those expectations. And then there’s Aunt Clara herself, who has expectations of her own.
Josh is in many ways a coming-of-age story; the story of a fourteen-year old who finds events entirely out of his control and in the hands of others, and who in the end has to assert himself regardless of the consequences. It’s beautifully and individually written, taking a close third-person view which plays with sentence structure to communicate the impressions of Josh’s senses as effectively as his thoughts and actions. And Josh himself feels like a real teenager; although the story is set, apparently, in the 1930s, there’s a real sense of the universal constants of the teen years in his character.
What’s most impressive about it, though, is the way that it draws you in. I have my copy here on my desk, and since re-reading it for this review, I keep finding myself pulled back to it; dipping into it; revisiting episodes as if in search of more. And each time there’s more to be found.
John Dougherty

Return to REVIEWS HOMEPAGE
Posted by Penny Dolan at 20:43 Permalink

Ivan once told me it was the book which was the hardest one to write. It has a lot of himself in it.

That's fascinating, Cat! Josh isn't a title I'd ever heard about but John's review makes it sound as though it should be on a "classic" list.

I really think it should, Penny. I had a weekend visitor once who started reading it when I was out - when I came home, she was wide-eyed, unable to believe she'd never heard of it.

And, Cat, I can believe there's experience in the story. It reads like it.

I haven't read Josh, but I remember there used to be a book of Southall's called Ash Road about in schools a lot in the 70s. It's so sad how books disappear, isn't it? Always makes me think of the Cemetery of Forgotten Books, in Zafon's The Shadow Of The Wind.

I hadn't heard of this book either, John, but I will look for it now.