MEMORIES IN A HOUSE by Lucy Boston. Reviewed by Adèle Geras

Before you embark on this review, dear Reader, please follow the link below to a piece I wrote in June on the History Girls blog. This will fill you in a little on the background to what I have to say today and also show you something of the house which figures in the book I'm discussing. http://the-history-girls.blogspot.co.uk/2012/06/manor-hemingford-grey-by-adele-geras.html

I bought a book called MEMORIES shortly after visiting the Manor. It's a handsome volume, published by Oldknow Books, an imprint set up by Lucy Boston's family and estate. This contains two memoirs: Perverse and Foolish which speaks of Boston's childhood and youth and Memories of a House which is about the Manor, and the life this most intelligent and interesting of writers lived in it. It speaks of how she restored it, how she made the garden, how the whole fabric of what we see today was put together over years. 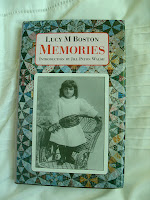 The book has an excellent introduction by Jill Paton-Walsh, another highly intelligent and sensitive writer who was a friend of Lucy Boston's. It's good to have the personal view and it adds to what Boston herself has revealed to us. She is a somewhat guarded writer and clearly a modest and unassuming person. For instance, for me and for thousands of visitors to the house, the patchworks which Boston made over the decades are one of the main attractions. These and how she came to create them; how they fitted into the almost constant work of restoration of the house, to say nothing of the writing of the novels, are not mentioned. To anyone who didn't know about them, Lucy Boston's own words would not provide any hint of their beauty and originality. 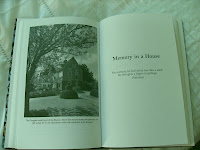 What strikes a reader is the clear sound of Lucy Boston's shrewd and elegant words. It's quite spooky (and the Manor is the most haunted of houses) how clearly her voice comes through the text, almost as though she were speaking to you. It's like an audio book without the audio. She's fearless, sensible, practical and yet very aware of strange vibes in the atmosphere. Reading between the lines, the villagers of Hemingford Grey were not kind to her during the Second World War. Lucy Boston wore an Austrian dirndl skirt for comfort and ease and this was regarded as most suspicious. Perhaps she was a German spy!

It's hard to pick out favourite things from a book like this. There were many sentences I felt like underlining. For example: Very small cracks in our outer shell of reason let in very cold air. The most moving part of the book is the account Boston gives of many musical evenings she used to host in the Manor at which the young airmen from a nearby station would come and sit on cushions and listen to every sort of record on a huge machine which you can see in my post at the top of this review. I also loved her thoughts about the roses in her garden, because I am mad about roses and she speaks so wonderfully about them. Also, for any children's writers, her account of going to collect the 1961 Carnegie medal (for A Stranger at Green Knowe ) is quite hilarious and quite ferocious in its merciless skewering of those who in those days as often today, put children's books on an altogether lower plane of achievement.

You are not going to find this beautifully-produced book in Waterstone's or WHSmith's. You won't even find it in independent bookshops. You have to write to Diana Boston, Lucy's daughter-in-law, who now lives in the Manor and still shows visitors round herself. The house is well worth a visit but even if you have no intention of doing that, treat yourself to something that will be a joy forever. The ISBN is: 095232332X . It's not expensive. £17.00 won't buy you much that's as lasting and pleasurable as these words. Send a cheque to Diana Boston at The Manor, Hemingford Grey, Cambridgeshire, PE28 9BN. The telephone number is: 01480 - 463134. The website is: http://www.greenknowe.co.uk/

Posted by adele at 07:00 Permalink

A review written with love and much admiration! Makes the book and the house sound so wonderful and atmospheric. Thank you for sharing this pleasure - and all the useful details too.

I loved this book! It was what started us on buying old English shrub roses many decades ago.

I love this book too, Adele - thanks for writing so beautifully about it!

Not a word said too much Adèle, I am halfway through the book, just started the second part about The Manor. I have visited it in September, which helps a lot to visualize Lucy's architectural explanations. Loved your review!

Emailed to Penny for posting. (Thanks, Katja.)

I agree with every word of your review, Adele. It is a wonderful book about a wonderful woman and a wonderful place. All of the above are full of wonder, yet noticed and recorded with such refreshing common sense!