The Devil's Staircase by Helen Fitzgerald: reviewed by Gillian Philip 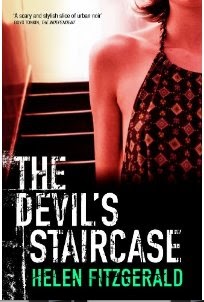 Please note: this review is of an adult novel (officially speaking, but see below).

I came on this book, and this author, not by accident so much as by duty. Scheduled for a panel discussion at the first ever Bloody Scotland crime writing festival - this September in Stirling - I had that sudden, ghastly realisation: that while I already knew and liked @FitzHelen from Twitter, I had somehow failed to read any of her novels. I already knew and loved the work of my other fellow panellist, Cathy MacPhail, but Helen's books, if not Helen herself, were new to me.

Our event was titled Once Upon A Crime and was aimed at discussing Young Adult crime fiction in a festival mostly devoted to the adult variety. Helen's own YA novels, Amelia O'Donohue Is So Not A Virgin and the forthcoming Deviant, are so far only available in the States, so to get to know her writing I chose one of her adult books: The Devil's Staircase.

I wish every duty felt so little like a... duty. Character and voice being my absolute favourite thing/two things in a book, I was delighted (and not a little envious) to be grabbed by the throat on para one page one.

The person doing the grabbing was Bronny, a naive young Australian who runs away to London and the freedom of life in a squat. She has her reasons, and they're not your average needing-to-find-oneself, coming-of-age motives. Indeed, the last thing Bronny wants to find is her self, and the truth of it. Try not being seized and shaken by a girl whose first words to you are these:

"It was fifty-fifty. Mum had it, and died in a pool of her own mad froth."

Oh, Bronny has her demons to escape - in the form of that fifty-fifty chance of a hideous life-threatening disease - and you want her to elude them every bit as much as she does herself. But of course this is a crime novel, with mystery and murder at its heart, and those do not take a back seat. One of the things I liked best about The Devil's Staircase was that although it never lost sight of Bronny's mental torment, it did not gnaw endlessly at it. Bronny is justifiably distracted by her fears, and they contribute to the heartstring-snapping tension of the central plot, but there's something even more sinister under the floorboards - and in the best traditions of the gutsy heroine, Bronny is the one who's going to have to discover it.

We talked a lot at Bloody Scotland about how YA crime fiction differs from the adult version. A young protagonist, the three of us agreed (under the penetrating quizzing of our wonderful chair, Dr Cristina Johnston). We differed a little on whether we'd tone down bad language, violence or sex, but none of us would patronise our readers by 'writing down'. No didactic moral lessons, we also agreed, but maybe a moral heart: a sense that deaths have to matter; that victims be real and mourned and valued as more than plot devices or splatter-fodder (the way it is in the best adult crime fiction, I hastily add; but I for one have read adult fiction where that just ain't so).

But maybe the most important thing, we all reckoned, was a sense of hope at the end. Not a happy ending, necessarily - sometimes anything but - but there has to be at least a way out of violence and misery, a shot at redemption.

The Devil's Staircase qualifies on all counts, as far as I can see, and though it is definitely an adult novel, I wouldn't hesitate to recommend it to a mature older teenager, albeit one with a strong stomach. Bronny's certainly young enough to be a Young Adult heroine, though the horrors that face her are very much of the grown-up world. The victim who takes centre stage in the novel is as important and vivid a character as Bronny herself, and I bit off my favourite nail worrying about her family and her fate (indeed I took to Twitter at one frenetic point to berate her author). As for the ending...

Well, no spoilers. But if you like a psycho-thriller that keeps you reading till the small hours simply because you care desperately what happens - this is one for you.

Brilliant exposition of YA writing and review of The Devils Staircase. Must have been a great panel discussion for the festival audience.

Thanks Penny! The discussion was great fun (and was my first panel event!). I'm looking forward to reading one of Helen's YA books now, to compare and contrast.

I haven't read any YA crime fiction. I like the idea of it though. Time to visit the book shop, I think.