‘I was but seven year auld
When my mither she did dee;
My father married the ae warst woman
The warld did ever see.

‘For she has made me the laily worm,
That lies at the fit o’ the tree,
An, my sister Masery she’s made
The machrel of the sea.’ 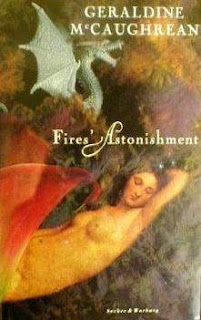 From the snake in the garden of Eden, via St. George, Theseus and Grendel to Carroll’s Jabberwock, C. S. Lewis’s comical Eustace and Ursula LeGuin’s Earthsea, dragons have been one of storytelling’s favourite devices with which to explore preoccupations about evil, power, the nature of knowledge and the various forms of beastliness lurking beneath our humanity.

There may be some writers who have never wanted to write about a dragon; I am not one of them. I have my own dragon egg incubating, although its hatching date is some years hence. To keep my imagination warm, I like to fuel it with interesting dragon stories. When a friend told me that Geraldine McCaughrean had written a novel for adults about a dragon, and then kindly lent me his copy, it went to the top of my reading pile.

McCaughrean is a writer’s writer. Her prose is elegant, powerful, witty; and this book must surely be amongst her most accomplished. Fire’s Astonishment, published in 1990 by Seeker & Warburg,  was McCaughrean’s second adult novel. It’s a fable, a fairytale – in the best sense of that word – set in a feudal, monk-riddled England. It draws on history, mythology, religion, but most of all, upon McCaughrean’s own gently acid and surgically precise observations about human nature and relationships.

Leo, lord of a small manor near the sea, returns home after a visit to court to find his two adolescent children have disappeared. Their stepmother, the triumphantly pregnant Gywne, recounts the spiritual visitation that led Leo’s son, Elshender, to renounce the world for a monkish life. His daughter, Frideswide, is also missing, reportedly shipped to France as bride to a nobleman.

Now, Leo is a fool – a man more good than bad, but weak and easily led. The reader knows at once that the Welsh-sounding Gywne is to blame; and when rumours arise of a dragon at nearby Worm’s Head, we rightly suspect witchery. The son has been transformed by his stepmother into a beast; and his bethrothed, the dark-haired Elfleda, is shamed and abandoned.

But Gywne’s plan to supplant her husband with her lover and ensure that his bastard child will inherit the manor runs afoul of another simple man – a slightly clever and much better man: Anselm, Leo’s younger brother. Anselm, nearly as large and fleshy as the dragon that was once his nephew, has loved the much younger Elfleda as long as he can remember. If this book has a hero, it is Anselm; if a heroine, Elfleda.

Anselm proposes, and Elfleda accepts with the desperation of the virgin eager to rid herself of her maidenhead and the associated risk of becoming a human sacrifice to the monster dining off the local peasants’ cattle. Poor Elshender, trapped in his beastliness, stalks Elfleda and sends her near witless into his uncle’s arms.

Largely, this is a book about sex. About the beast in all of us; about the human desire to be something more than the sum of our bodily functions. It examines the gross temporalness of our bodies; looks with wit and compassion at the poignancy of our frailty and ugliness – and contrasts the two paths sought as remedy for this earthly, and earthy, state: good and evil.

His man’s rational passion had hankered after Elfleda. Now his unmaterable, mountainous animal heat shackled him to her territory. He marked it, he patrolled it, he held it, and it held him, for a day and a half. When it snowed, the silent cold wiped out all smells and froze the sweat under his scales. The desire in his loins shrank. he thought to set himself on a path away from any place he knew: somewhere empty and open, where hunger would be the only instinct. He rolled wistfully in the snow, his body dissolving into a comfortable numbness and his mind made free to think again. To be a dragon was merely to be seen by human eyes and called a dragon. Away from eyes and away from impulses, Elshender could patrol some empty hinterland, no more loathsome to the things he killed than he had been when he hunted on horseback.

Elshender is a victim, but he is no elegant, heroic youth. Before his transformation, he was a gangling adolescent given to whoring with the local servant girls. His desire for Elfleda is wholly selfish: it is about lust, ownership and status.

One of McCaughrean’s touches of genius in this book is that her dragon presents us with a portrait – in wide screen, high-resolution – of our own human unloveliness and the claustrophobic torment we sometimes feel trapped within our own ungainly flesh:

…Elshender woke up, dreaming of his father, and turned over. The great weight of his body almost crushed the air out of his lungs. He flung his hips back into their first position, and waited for the feeling of panic to subside.

…Elshender the boy had been thin and over-long in the back, his thighs hardly thicker than his calves, his eyes astigmatic and pale, his arms no stronger than he needed to throw dice or whirl the occasional jessy. He loved that inadequate body now: like Narcissus by his pool, he doted on its remembered image. He saw all its virtues, as if through the eyes of an enamoured woman.

Here, Elfleda tries to convince her new husband, Anselm, of the dragon’s existence:

‘Its leg touched me! Then it raised itself up – not in a squat but right up on its back feet. Its belly was the colour of tripe. I could see its lights pumping and bulging through its skin . . . It was such a . . . meaty animal, ‘Selm! I mean – what do I mean? – I suppose I thought the dragon of the Last days would be vaster, or standing in the sky with stars for eyes, you know? It was the difference between the Golden Calf of the Israelites and an ordinary cow standing there in the garden.’

Beyond the elegance and power of the McCaughrean’s prose, the thing that remains with me most strongly upon reading Fire’s Astonishment is the largeness of the characterisation. Not one among the cast of characters, even the most evil, is given less than their due. Portraits are drawn with intelligence and humanity. Each of these characters will stay with you long after the book has been returned to the shelf (or, in my case, its rightful owner).

Find a copy of Fire’s Astonishment; read it. And hope that McCaughrean will give us another adult novel before many more years pass.


Return to REVIEWS HOMEPAGE
Posted by Ellen Renner at 15:42 Permalink

"Fire's Astonishment" sounds a most brilliant book, from an always interesting and brilliant writer. Thank you for the recommendation!

Lovely review, and the book sounds great. Thanks, Ellen.

You've definitely grabbed my interest to find out more. Off now to look it up. Thanks!

Love G McC's adult novels and it's a shame they didn't sell better...then she'd write another, perhaps. Thanks for highlighting this one!