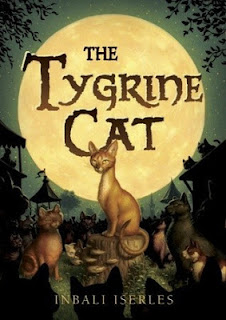 A young orphan who finds himself lost and alone in an unfamiliar world, yet fated to fulfil a destiny that's his alone, Mati comes from an illustrious tradition of children's heroes. The fact that he is an Abyssinian cat won't stand in the way of any human child empathising and rooting for him all the way on this thrilling and beautifully written adventure story.

From the haunting prologue, when his mother the Tygrine Queen sacrifices herself to the Suzerain's assassins to save her son, I was engrossed in Mati's dangerous but fascinating world. She sends him away on a ship as a bewildered stowaway who can remember nothing of his mother, and when he finally slips down the gangplank at London's Cressida Lock his adventures truly begin. It's one of those starts-with-an-earthquake-and-builds-to-a-climax plots that plunges you straight into the action and never lets go until the final thrilling (and spine-tingling) denouement.

The Sa Mau and the Tygrine are tribes that have been at war since time immemorial, but the ancient conflict is still very much alive, and still has ramifications for every cat in the world. Neither Mati nor his new friends, the feral cats of Cressida Lock, know just how important he is, and that puts every cat at a terrifying disadvantage when a deadly assassin, Mithos, tracks Mati to his new home. Mithos is a fabulous creation, and as someone who loves a good Bad Guy, I think he's a splendid addition to the pantheon of villains.

If it's a tough job to create unique and individual characters out of a tribe of cats, Inbali Iserles doesn't show it. Every single cat has not just a distinct personality but an important individual role to play in the story. I loved them all, bad and good: from the leaders of the two warring London clans, Pangur and Hanratty, to the conflicted Binjax and the lost but brave housecat Jess. I especially liked the fact that there's nothing straightforward in the relationships in the story. Domino is a loyal friend - until, under peer pressure, he suddenly isn't. Binjax is a bully and a sneak who can still surprise. Some cats 'own' - and have responsibility for - humans; some will have nothing to do with them. The humans who share the cats' territory and lives are all individuals too. I particularly loved Sparrow, the old eccentric cat who takes Mati under his wing and keeps the faith when no-one else does.

The supernatural world of Fianey and the gods and myths that exist alongside Mati's world are not just entirely convincing, they are beautifully drawn. Inbali Iserles writes like a charm; The Tygrine Cat is one of those books where you can enjoy not just the story but every sentence. I can't imagine there's a young cat-lover - or indeed an older story-lover - who won't be enchanted by it.


Return to REVIEWS HOMEPAGE
Posted by Gillian Philip at 00:01 Permalink

Thank you so much, Gillian, what a wonderful review. You have made my day! *Purrs all round*

I am fortunate. I live in a minor town encompassed by slopes, and my felines can securely travel every which way however they see fit. Obviously this implies I get the infrequent "blessing" of whatever they astutely choose to drag into my home, however it likewise implies that they have a tendency to get their climbing and scratching out of their frameworks and treat my furniture essentially an indistinguishable route from I - to sit on and mull over.
cat related gifts

If you’ve got a cat that keeps peeing all over your house, it becomes annoying after a while.

The bad smells and the effort involved in cleaning up makes life a misery.

So much so that some people consider getting rid of their cat...

Cuz that seems to be the only logical way to solve the problem.

But the great news is you don’t have to do this.

You CAN keep your cat and stop the problem.

All you have to do is try “Cat Spraying No More”.

It’s a PROVEN step-by-step system guaranteed to stop your cat peeing outside its litter box.

You’ll discover how to use your cat’s own instincts to stop the problem.

And it’s also backed up by a 60-day money back guarantee, so there’s no risk.