A SWARMING OF BEES by Theresa Tomlinson, reviewed by Penny Dola

As soon as I saw “Whitby Abbey” in the blurb, I was keen to read it, but if you’re keenly gothic, there is no Dracula connection – though there is Anglo-Saxon darkness and drama.

Far back, in 664, when Oswy’s kingdom of Northumbria stretched from the Humber into the present Scottish borders, Whitby Abbey flourished under its old name: Streonshalh. The abbey community was composed of men and women - religious and lay-people of both sexes – and even more remarkably was ruled over by Hild, both abbess and princess. 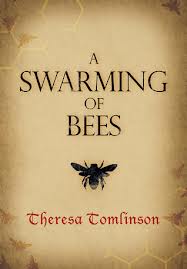 A SWARMING OF BEES starts after the famous Synod of Whitby, with the final feasting and departures of both church and royalty. The Synod has just chosen to follow the Roman model of Christianity, rejecting the Celtic tradition, so there are hurt and angry souls about, as well as those who secretly serve the old gods and goddesses. It is an interesting time and place.

Hild, proud of the hospitality, honour and learning of her abbey, is important to the story, but the central character is the ageing herb-wife Fridgyth. A warm, practical and occasionally impulsive woman, Fridgyth is welcomed for her skills in and around the abbey, especially when plague arrives.

However, caring for the sick and dying, she discovers that some deaths are not from the plague: a murderer is in the abbey. Furthermore, one of the guests, even in disguise, could be in serious danger. The murderer must be found. not just for the sake of the likely victim but also for the reputation of Hild’s abbey  and the volatile peace between the kingdoms of that age. The plot, reminiscent of a Cadfael mystery, has a calm but determined pace. The last section, with the unexpected journey and the tying of the Caedmon character’s thread, made a particularly satisfying conclusion.

Although some of the minor characters are recognisable historical figures, often feelingly drawn – for good or ill - they were not what gave the story its charm. What I enjoyed most was the world created by the writer: the many buildings within the abbey, the descriptions of feasts and processions, the busy range of roles and tasks and animals, the landing stage down by the river Esk, the seashore where Fridgyth searches for seaweed, and more, including the keeping of bees. As for Fridgyth, I did find myself hoping there might be another adventure for her, sometime.

Theresa Tomlinson lives in Whitby so possibly it is her knowledge of the landscape that makes this story feel so grounded. Theresa says, in her Notes, that she “enjoyed creating a picture of Abbess Hild and her monastery that is more “How I would like it to have been” than an attempt at accuracy. Where historical sources are clear and interesting to me, I have used them, but I’ve also used my imagination freely.”

I very much liked how it might have been, too, when I read A SWARMING OF BEES.

This novel is written for adults but I am sure that many Y/A readers with a love of history would enjoy it too.  I read the novel on my kindle but there’s a paperback edition too.

Ooh! I must read this! I visited north Yorkshire, and Whitby, not long ago, and became fascinated by Hild and the beginnings of the abbey. What a lovely, restrained cover!

I've just jumped over to Amazon and bought it with one click, Penny! Sounds just my hammer.

I am lucky enough to have a copy and will read it very soon. It sounds brilliant and looks good too. I like that remark of Theresa's about using the sources where she could understand them but also using her imagination freely. That's the way I like to write historical fiction, too!