DON'T JUDGE ME by Linda Strachan, Reviewed by Penny Dolan. 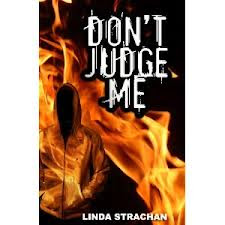 This novel's stunning cover blazes with flames, reminding us that arson is, in writing terms, already an interesting focus for a book for older teens and young adult readers.

However, in “Don’t Judge Me” award-winning author Linda Strachan has also created a very clever novel. We are offered four – or maybe five – protagonists, each of whom could have set the fire, but the plot takes one twist after another, making the reader suspend judgement.

The book is written in a simple style and the different viewpoints are clearly indicated so the novel feels accessible for most teen readers.

Chapter by interwoven chapter, a loose gang of four teenage friends reveal more about themselves, their backgrounds and their conflicts..

The novel begins strongly, with stroppy, half-drunk Suzie, a rebel in foster care, catching a baby tumbling from one of the burning flats on the estate. Another fire blazes in the home of Jenna and her loving Indian family.  Unlike Suzie, Jenna gets almost everything she wants - except the freedom to be an individual. Now, forced to move into her aunty’s home, Jenna will be even more closely watched. And was the fire a racist attack?  Jenna and her family face troubling threats.

The pair of boys are Malky and Jack. Troubled Malky is someone Suzie has known since they were in care together, but now he brings his own problems and solutions to the mix. Jack, Malky’s friend, seems to be the most stable of the group – but is he? Jack lives with his frail grandmother. His journalist mother is more interested in her assignments abroad than in her own son and he is full of hidden anger and bitterness.

A local police officer, DI Larkin,  has the task of trying to untangle the case and the conflicting clues - as well as working out what the anonymous witness saw on that night when the fire took hold – and how her terrified account fits in with the statements on his desk.

At first, the four teenage friends seem to have little in common beyond their love of hanging about together. They are full of the usual teenage jealousies, insecurities and bravado. They get annoyed by each other and indulge in tantrums and games, especially games that can go wrong. Nevertheless,during the novel, the experiences they share force them to decide on where their loyalties lie and the importance of truth.

Meanwhile, the reader is forced to wait and suspend judgement until they have heard each part of the story in full.

As author Keith Gray says, “Don’t Judge Me” is “a tricksy whodunit” and a great contemporary read for teenagers.

Don't Judge Me was published in 2012 by Strident Publishing.

Return to REVIEWS HOMEPAGE
Posted by Penny Dolan at 16:51 Permalink