The Planet Thieves by Dan Krokos: reviewed by Gillian Philip 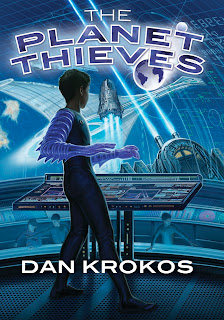 I have been a sucker for space adventure ever since Star Wars caught me at an impressionable age. (I mean the first three. Let us never speak of the prequels.*) How we marvelled at the groundbreaking special effects of 1977. Some of them look a teeny bit ropey now (really, they’ve held up remarkably well), but the movies endure, because, well - it wasn’t about the special effects. Not entirely, anyway. The first Star Wars, an unexpected hit, was a mash-up of westerns, Robin Hood and Saturday morning serials. The story was the thing, and the thrills and the adventure and the romance and the cliffhangers...

Which is where Dan Krokos comes in. The Planet Thieves is the first in a middle grade series following the adventures of Mason Stark, his bitter frenemy Tom Renner and the violet-haired, eerily beautiful but mysterious Merrin Solace. I liked that Mason from the get-go: when we first meet him, hiding behind the pilot console of the SS Egypt, he’s just played a prank on his sister, a Lieutenant Commander of the fleet, by removing all the bolts from her chair. Well, he’s bored; he’s only a thirteen-year-old cadet logging space time, and he and the other cadets have done nothing but kick their heels, squabble and get in the way of the crew. (I couldn’t help picturing a much younger James T Kirk from the rebooted Star Trek movies.) 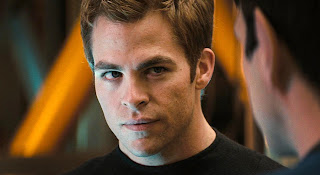 Anyway, he knows how to pick his moments, does Mason. Earth is at war with the Tremist (a war sparked ‘because two races were really bad at taking care of what they had’) and the SS Egypt comes under enemy attack just as Mason’s removing the last bolt.

See, that’s what I like in a book. Straight in at the deep and dangerous end, and then let’s see how much worse it can get.

Of course, it’s the irritating ‘cargo’ of cadets who escape notice and capture when the crew and senior officers are overwhelmed, and it’s down to them to save the day. There follows a properly action-packed thrill-ride, full of swashbuckles and narrow escapes, but it’s not all smash-bang-wallop; with Mason, Tom, Merrin and their fellow cadets forced into the role of heroes, all their faults and foibles are exposed. They all have histories and they all have secrets. and things are going to get hairy on the personal as well as the combat front. And the stakes are higher even than they thought, because the Egypt turns out to be carrying a weapon that could change the course of the war...

I mentioned movies because that’s how the book feels in your head. It’s kinetic and very visual, and any kid who loves science fiction or superheroes is going to adore it. Mason and his friends are heroes to root for, and the Tremist are magnificent villains, sinister but complex - not least because despite 60 years of war, nobody knows what they are.

Oh, and the special effects are fabulous.

The Planet Thieves is published on May 21st in the States; this side of the Atlantic it’s currently available only as an audiobook, but keep your goggles peeled because I’m certain it’ll cross over here at warp speed - not least because there is word of an ACTUAL Warner Brothers movie.

The Planet Thieves by Dan Krokos; published 21st May by Starscape Books

*PS Nor shall we ever speak of the Ewoks.

Now that sounds like a book worth listening to and watching out for!