FIZZLEBERT STUMP: The Boy Who Ran Away From the Circus (And Joined The Library). By A.F. Harrold. Review by Penny Dolan


I met the author of this book, A.F. Harrold -  a red-haired, red-bearded poet – at the Stockton Children’s Book of the Year event just before Easter. I also had to admit I’d never heard of his book title before.

An aside: That "new book to read" moment, in itself, is one of the strengths and pleasures of the many regional library awards.

From my experience, having also visited the West Sussex Children’s Book Award, these carefully-thought-out reading projects seem, within the limited number of titles on their lists, to offer a wide variety of fiction to all the children and schools involved. The awards introduce the young readers and the schools to wider range of reading styles and enthusiasms than they might choose for themselves. So a huge hooray for all those unsung librarians who do the work that keeps these regional awards going!

Meanwhile, back to the subject of this review - and our oddly named hero.

Fizzlebert Stump lives with his two busy parents (a clown and a strong man) in a caravan, because he is a circus child. Surrounded by adults and animals, Fizz is not very familiar with the ways of the ordinary world. He is also lonely and longs for another child to be his friend. 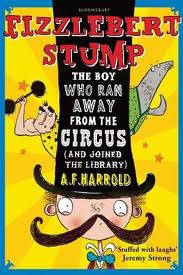 One day, Fizz meets a gang of friendly children. However, when he reveals his full name, they tease and bully him.  In all the fuss, one of the gang drops a library book which is a concept unknown by Fizz. Asking around, he is told there is a library nearby. Deciding to do the right thing, he returns the book to the mysterious building.

There Fizz makes an error. He tries to borrow a book and discovers he needs to have his own personal ticket. The librarian has handed him a long and official form that his parents must sign. Fizz is totally dejected. They would fill it in with his now-derided name, and besides, he wants the book now.

So Fizz agrees to let two old people fill in the form, using a false, ordinary name – John Smith – and he lets them claim they are his grandparents. Oh dear! Once outside, Fizz finds he is in their power.

The two Stinkthrottles grow nastier, in true Dahlesque style. They terrify poor Fizz, insisting he is a lying thief who stole a book, and take him to their house. Their home is disgustingly, overwhelmingly dirty (Warning: The book is best not read by adults alongside any food or meal) and Fizz is now their servant. Even worse, Fizz realises that his parents do not know knows where he is!

In the middle of the dump that is the Stinkthrottle home, Fizz discovers Kevin, a boy kidnapped a few days before. The pair are suitably stoical, brave and resourceful and, by the inevitable rescue, true friends.

However, what this account of the plot does not tell you is the way the book is written.

This is a story that delights in expanding its telling. Much as in Philip Ardagh or Lemony Snickett’s writing, there is a great deal of “authorial presence.”

Whole paragraphs are given over to the explanation of words or the expansion of an idea and the closing of a chapter and so on. Harrold, being a poet, uses words almost for the sake of the words, as well as brackets and asides and all sorts of similar literary devices.

At times, the writing gets almost to the point of overbalancing - or so one worries – but the reader is kept going by the simplicity and fun (and disgusting details) of the basic plot as well as the appeal of Fizz as the central character.The children who chatted to me about the book enjoyed this wildly wordy style tremendously.

Finally, here's a sample of the style, here’s the start of Harrold’s description of the Stinkthrottles home. I couldn’t bring myself to type out any of the more gruesome description, though.

“Their house looked just like the set of a disaster film, just after all the big action has happened. To call it untidy would be an understatement of monstrous proportions. In fact to call it untidy would be a bigger lie than the fib Mrs Stinkthrottle had just told Fizz about the library. If there is a word which describes quite how much of a tip their house was I don’t know it (I looked) but I imagine it would be spelt with a lot more letters than just the six that make up the unsatisfactory word “untidy.”

If you know a child that likes words and humour,, this may be the book for them. 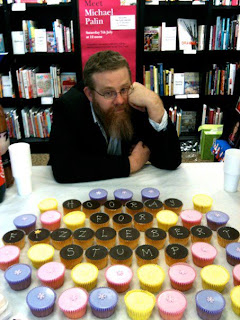 FIZZLEBERT STUMP:
The Boy Who Ran Away From the Circus
(And Joined The Library).


Return to REVIEWS HOMEPAGE
Posted by Penny Dolan at 10:00 Permalink