The Storm Bottle by Nick Green

THE STORM BOTTLE by Nick Green, reviewed by Cecilia Busby 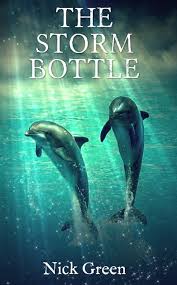 I thoroughly enjoyed The Storm Bottle - in fact, I read it under the covers in bed, just as if I were ten, not wanting to go to sleep till I knew what was going to happen next. It's a perfect adventure story - with the twist that two of the main protagonists are part-human, part-dolphin, and mirror images of each other - one, a dolphin trapped in a human body, the other, that same human trapped in the dolphin's body. Their link is Bibi, the girl who is our narrator, and who witnessed the moment of the transfer when her step-brother almost drowned, trying to swim with dolphins, and was brought back to consciousness strangely unable to speak or do the simplest thing for himself. The book really takes off from this point, where we switch back and forth between the attempts of the misplaced dolphin, Rodrigo, to learn to be human, along with Bibi's gradual understanding of what's happened, and the separate adventures of the boy Michael, learning to swim, fish and fight with Rodrigo's ex-pals. I loved the dolphin bits - the idea of the dolphins as a little like swashbuckling pirates with Spanish accents - and although dolphin society was portrayed as exceptionally sexist (maybe it is, who knows?), the female dolphin character who befriends Michael is a very strong presence. In the background are a number of family tensions: Bibi and her step-brother loathe each other, their parents having only recently married, and the raw emotions let loose by Michael's apparent 'brain damage' after his accident look set to destroy that marriage just as Bibi starts to have some empathy for Michael. The driving force of the book, however, and the element that kept me reading till it was way past my bedtime, is the question of whether Michael and Rodrigo will manage to find a way to return to their original lives, to switch back: the odds don't look good, but if anyone can make it happen, it will be Bibi. She is the heart of the book, and a great character: she is feisty, independent and determined but also hides a knot of grief and hurt deep down. The way that Rodrigo, the dolphin-turned-boy, sees this, and gets her finally talking about it, is really moving. I won't give away the end - but it's a gripping read, which is as much fun for adults as children, and I thoroughly recommend it.

Cecilia Busby is the author, as C.J. Busby, of the Spell series, published by Templar
www.frogspell.co.uk

Return to REVIEWS HOMEPAGE
Posted by C.J.Busby at 08:30 Permalink