A World Between Us by Lydia Syson. Reviewed by Ann Turnbull 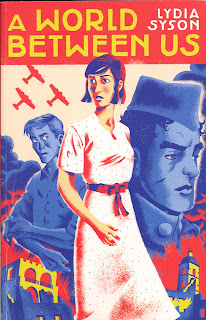 Among other inspiring stories of left-wing solidarity, my father used to tell me about the Battle of Cable Street, when Mosley tried to march his Blackshirts through London's East End, and the people who lived there stood shoulder to shoulder and decided "they shall not pass".  So when I heard that Lydia Syson's novel begins with that confrontation I immediately wanted to read it - and I was not disappointed.  It's a lovely, satisfying story, both romantic and realistic.

Trainee nurse Felix (Felicity) gets caught up by chance in the Cable Street turmoil, and encounters Nat, a young Jewish man who has just signed up to join the International Brigade and go off to fight in the Spanish Civil War.  In the course of a few brief meetings they fall in love, their emotions heightened by imminent parting and the prospect of war.

Nat is a working-class boy, Felix a middle-class girl with a stuffy brother and safe background and a nice but seemingly dull would-be suitor, George.  Her life seems predictable, and she makes a dramatic move to escape it: she volunteers as a nurse and follows Nat to Spain.  George goes after her in hopes of bringing her home to her family - but he too is changed by events and ends up joining the International Brigade.  These are idealistic young people who see clearly how the plight of the Spanish people is connected to wider struggles for freedom and democracy.

Lydia Syson creates a moving and detailed picture of the privations endured by the medical staff in Spain, the suffering of the wounded, the horror of battle, the despair, and the wrongs committed by both sides.  In particular she conveys well the chronic exhaustion and the moments of snatched joy.  Her main characters are engaging, and all three are faced with difficult choices which keep the reader involved.

The Spanish Civil War is a period of history that few people now seem to know about, and this story is the perfect way to learn more.  And although the story was written for teenagers, I think adults would enjoy it just as much.