The Fate in the Box, by Michelle Lovric: reviewed by Sue Purkiss

The D’Agos’ house was surrounded by the homes and workshops of ’s cloth-dyers, whose sheets of crimson, emerald and saffron-coloured fabric hung like glorious mediaeval pennants from the rooftops and windows. Although the sun had barely risen, it was warm in the workroom. The pungent smells from the dyers’ vats were stealing through the air, along with the sleepy voices of the girl orphans warbling their morning hymns at the grand almshouse of the Mendicanti.

This is a fairly random extract from Michelle Lovric’s new children’s book, The Fate in the Box; I could choose a couple of sentences from almost anywhere, and in the same way, they would reflect the delight in a place (Venice) and the delight in language which are hallmarks of Michelle’s work. You can see, so clearly, the vivid colours of the lengths of fabric; you can feel the warmth in the workroom, smell the dyes, hear the voices of the orphans – and just in that passing reference, you are given a sense of the kind of life those girls are leading, in the strict regime of the cloister. In just the same way as this short extract, the book is full of rich detail and exuberantly imagined places and people. It’s not just the circumstantial detail either; the characters are all utterly individual, each with their own, very special voice, and the story twists and leaps and dives like one of the mermaids who helps to protect the city. 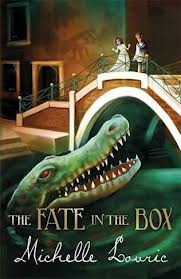 Michelle has already written three other book for children set in this alternative . She’s going backward in time: this one precedes the other three. Some of the characters are familiar – those mermaids, for instance, beautiful and graceful but also greedy and earthy, with a ripe turn of phrase learned from pirates. Some of the family names are recognisable from earlier books too, and so is the general set-up: is in thrall to a selfish and brutal dictator, in this case Fogfinger, and only a small group of children – with the help of cats and various other creatures – can defeat him and save the city.

The Fate in the Box is not for the faint-hearted; in the very first chapter, it seems that Amneris is to be sacrificed at the whim of Fogfinger; she is forced to climb a tall tower, where the Fate in the Box will decide whether she will walk back down again or whether the trapdoor beneath her feet will open, catapulting her into the deep lagoon hundreds of feet below where a terrible sea monster is said to lurk. There are far more edge-of-the-seat moments to follow. But the way the story is told is so affirmative that, even as you seriously consider taking shelter behind the sofa, you know that ultimately good – and the children – will triumph.

I’d recommend this to boys and girls who enjoy adventure, humour, fantasy, and a good story phenomenally well told. It's published by Orion.

Incidentally, over on An Awfully Big Blog Adventure, Michelle has written a post about the window displays she has put together about The Fate in the Box - it's here, and it's fascinating.


Return to REVIEWS HOMEPAGE
Posted by Sue Purkiss at 01:30 Permalink

I love that extract, Sue, and it's made me want to read the book! Are these books stand-alones, or is it best to read them in order?

You can read them separately; they're set in different times, though some family names recur, which is fun. I think that chronologically, this one comes first, then The Undrowned Child (which was actually the first to appear), then The Mourning Emporium. But then I'm not sure where Talina in the Tower fits in.

But really, it doesn't matter which order you read them in!