The Weight of Water by Sarah Crossan review by Lynda Waterhouse 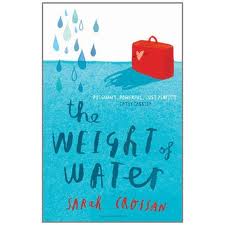 Ever since I read Vikram Seth’s ‘’ and Ellen Hopkins’s ‘Crank’ I have enjoyed reading novels in verse. Part of my YA novel, ‘Cut Off’ was written in blank verse .This poetic medium is ideal for the expressing Kasienka’s emotional turmoil. Sarah says ‘each word in a poem holds so much power.’
The book is beautifully packaged with a striking cover designed by Oliver Jeffers and has a quote from Cathy Cassidy on the cover which is guaranteed to draw the eye of the early teen reader for whom this novel would be perfect.
It tells the story of Kasienka and her mother who leave their home in and head for in search of their father. He has abandoned them and Mama is desperate to find him. They are forced to live in a studio flat
There are a lot of feelings packed into the taut verse. Kasienka has to settle in a new school and find her place amongst the mean girls and their petty unwritten rules. She finds herself falling for William. She has deal with her conflicted feelings about her father and his new life in alongside managing her mother’s pain. Her talent for swimming literally pulls her through,
At the pool’s edge I might be ugly,
But when I speak strokes
I am beautiful.
Despite its title I found that it did skim the surface of some characters and situations which was a little frustrating but there is so much to admire in this debut novel. It has already been short listed for The CILIP Carnegie Medal and The CLPE Poetry Award.
The Weight of Water is published by
ISBN 978-1-4088-3023-9