THE BATTLES OF BEN KINGDOM: THE CLAWS OF EVIL by Andrew Beasley, reviewed by Tamsyn Murray 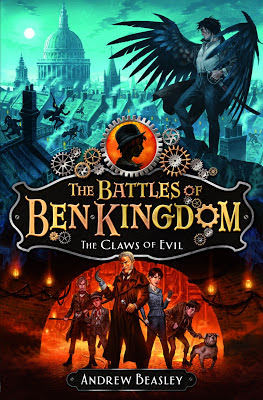 It's 1891 and, behind the exclusive doors of London's Sinistra Club, evil is gathering its forces. The Council of Seven, rulers of a shadowy society known as the Legion whose hand stretches back over two thousand years, are readying themselves for action and control of the city of London is their goal.

Standing in their way are the Watchers. Living on the city's rooftops, their vigilance has protected London for thousands of years. They believe in an ancient prophecy which predicts a saviour will help them finally defeat the Legion.

When a vital ingredient of the Legion's plan falls into the hands of a cocky street urchin named Ben Kingdom, he finds himself thrust into the midst of a deadly battle and struggles to know who to trust. Ultimately, he has to chose a side - good or evil - and it's by no means certain which way he will decide to go.

This accomplished debut novel, aimed at readers aged 9+ , is jam packed with danger and excitement. The story races along at breakneck speed, introducing and dispensing with a brilliant array of well-drawn characters as it goes. I loved the ambivalence of Ben - his brash exterior conceals an uncertain naivety which I found very appealing. I also liked Lucy Lambert, whose thankless task it is to watch over Ben and try to keep him out of trouble. But really, it's hard to pick out one or two characters because they are all intriguing, even the sickeningly evil ones.

I especially adored the design and feel of this book. The cover in particular encapsulates the Heaven v Hell theme of the story, with Ben caught between the two and leaves a potential reader in no doubt about what they are getting; an urban steampunk fantasy. Inside, there's a map showing Victorian London, with key locations picked out in greater detail and I must admit, I am a sucker for a beautifully designed map. The action is split over five days and each section (comprising a day) has a gorgeous line illustration to accompany it, giving a rich feel for the fantastical characters and creatures of the book.

I can't wait to discover what battles Ben Kingdom faces next. Bring on the second adventure!

Return to REVIEWS HOMEPAGE
Posted by Tamsyn Murray at 08:47 Permalink