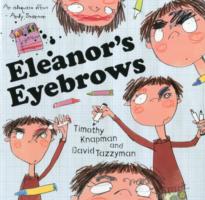 I'll be honest, I didn't intend to review Eleanor's Eyebrows at all today. But from the moment I saw the cover, complete with some of the most amazing eyebrows I've ever seen, I was sold.

The eponymous Eleanor knows what all the parts of her face are for. But her eyebrows bother her - they're just 'silly, scruffy, hairy, little bits of fluff'. Affronted by her lack of faith in their abilities, the eyebrows high-tail it off into the world, where they try out various new and often dangerous careers.

Eleanor, meanwhile, has realised that a face isn't quite the same without eyebrows and starts noticing them everywhere. She tries a range of hilarious replacements before deciding that she might have been a little hasty in dismissing her little bits of fluff and launches a campaign to bring them back.

Timothy Knapman's text is delightfully silly and even without the pictures, I could imagine Eleanor re-drawing her eyebrows. The story is cute and funny and skillfully weaves in a message about accepting yourself (and your eyebrows) for who you are. David Tazzyman's illustrations are everything you'd expect from the man responsible for bringing us the face of Mr Gum and they made me giggle just as much as the text.

Eleanor's Eyebrows has something for everyone because, as I commented on Twitter the other day, who hasn't fallen out with their eyebrows at some point? Just make sure you keep the Sharpies out of reach of small children once you've read it to them.

Looks great fun! And a good idea - I heard a child asking the same question only a day ago.

This sounds great - can you tell us, is it a picture book? What age is it aimed at?

Sorry, SA, I should have said it's a picture book. I'd say it's aimed at 4+ years old to get the most out of the slightly quirky storyline.