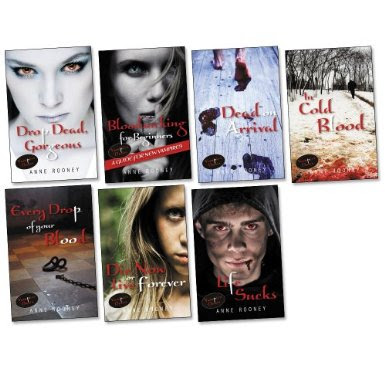 Real Vampires - as the ageless Spike would tell you in many a fetching internet meme - Don't Sparkle. Anne Rooney's don't, that's for sure. Nor do they disappoint.


The Vampire Dawn saga is a cleverly constructed series of short novels in the hi-lo style, ideal for the reluctant reader but no small fun for the enthusiastic one, either. The stories are compact and bijou - ideal for devouring on a bus journey to school, say - but packed with incident and character, not to mention blood and guts. If you know a teen or a slightly-pre-teen who isn't particularly keen on romance but likes a decent bloodsucker, point them in the direction of Vampire Dawn. 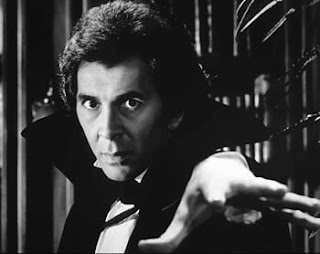 The books are readable in any order, but it would undoubtedly help to start with Die Now Or Live Forever. The whole story begins here - in the fine tradition of horror movies, with a group of mildly bickering friends on a hike in the woods. In this case it's the Hungarian woods, which seem to be populated by especially big and Hungary mosquitoes (boom boom).

This is the lonely spot where Juliette, Omar, Finn, Ruby and Alistair stumble across a dead body that doesn't stay dead for long. They also run into the (temporary) murderer: a downright panicky Australian called Ava, who doesn't understand why she's just had to stick a tent peg through the heart of her beloved boyfriend.

And in the morning the appeal of sandwiches and ginger beer seems mysteriously to fade, and the group begins to look peckishly upon the bewildered Ava...


The other books in the Vampire Dawn series focus on each individual member of the group, and what happens to them in the aftermath of their ill-fated camping trip: Juliette (Drop Dead, Gorgeous), Finn (Life Sucks), Omar (Every Drop Of Your Blood), Alistair and Ruby (Dead On Arrival) and Ava herself (In Cold Blood). Pretty much at random I chose Ava's story: some time after the events of Die Now Or Live Forever, the bewildered Australian girl is stumbling around Kosovo in a borrowed fur coat, with no memory of how she got there. All she knows is that she's hungry, and that she doesn't feel as jittery around a creepy and dilapidated circus as she normally would. In fact it could be a source of raw meat of several kinds...

Given the tightly restricted word count of each book (around 6,000?), the various characters and their relationships are briskly and efficiently drawn. Alistair, my particular favourite, is an OCD boy who likes to count things.


For the teen who's especially keen on traditional vampires, there's even a guide book: Bloodsucking For Beginners. Like the mysterious Ignace, a handsome stranger who seems to have strolled into the group's lives out of a 1930s black-and-white horror movie, it's full of advice for perplexed immortal newbies...

These books are terrific fun, and they're a great, snappy read. I adore the device of giving a book to every character, and Anne Rooney (who apparently doesn't eat meat in case she gets too much of a taste for blood) has clearly had a lot of fun with the genre's tropes and traditions. Yet she never loses respect for the primal, terrifying ferocity of vampires. There's romance and teen angst here, and the delights and agonies of friendship, but there's plenty of blood too - just as there should be.

I can't imagine many teens who wouldn't love a brief trip to the world of Vampire Dawn. I had a great time. (Also, the covers are fabulous.)

Return to REVIEWS HOMEPAGE
Posted by Gillian Philip at 00:36 Permalink

Am feeling very drawn to these books . . . Great review! Penny