Looking through a pile of children’s books, I opened up Jinx and was immediately drawn in to the fantasy. Sage Blackwood’s writing has an attractive openness and confidence. Familiar folk tale tropes appear in a nicely simple, matter-of-fact manner that makes them perfectly acceptably to the intended mid-junior fantasy reader.

The novel starts as young Jinx is led, Hansel-like, by his stepfather away from the village and into the Urwald, the dangerous forest that is almost a character in the book. Just as he is about to abandon Jinx to the trolls and werewolves, Simon Magus appears on the path. After some cunning trading, the wizard claims Jinx as his apprentice. 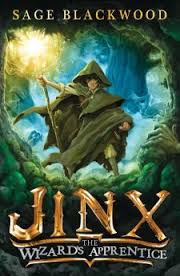 Jinx’s life as a servant in the wizard’s strange cottage.is safer, better-fed and more interesting but it is also full of contradictions. Is the short-tempered, self-centred magician good or evil? What does Simon really want from young Jinx?

Grumpy and bad-tempered, Simon insists the boy is too stupid to instruct in any magic or - at first - allow into his secret workroom. Jinx tries to match what he sees, feels and knows with the evidence around him, including Simon’s mysterious room. Naturally, as time goes on, Jinx becomes curious, especially when he feels that Simon is somehow travelling to other places and receiving visitors in his room, and curiosity always causes trouble.

The book has an interesting range of characters, all strongly depicted and often eccentric. Jinx ends up with two young companions. The heroine is young Elfywn, a girl in a red hood. Suffering from the curse of truthfulness, Elfwyn is trying to find her grandmother so the curse can be removed. The other boy – and often the source of Jinx’s jealousy - is Reven, the self-styled “king’s son” who speaks and acts like a hero learned from a book. Reven has his own secret curse too, one that brings fear to the forest.

There are magical adult characters too. Jinx is partly terrified by Dame Glammer, a lively sharp-tongued witch with her own morality and travelling butter churn. On the other hand, he grows fond of the good wizard, Sophie, who arrives from a land where magic is forbidden, even though her meetings with Simon often end up in wrangling. I feel that many children will half-recognise this pair as two adults who care for each other but who are unable to live together: the couple’s squabbles are very convincing. Finally, the plot includes the most powerful wizard of all - the evil Bonemaster – the enemy that Simon Magus warns Jinx about, even though Jinx gradually discovers the two have a far more complex relationship.

Simon is so busy with his own plans and projects that he does not recognise Jinx’s own supernatural gifts. The first is an ability to see the true feelings of people as swirls of coloured light, as auras that help him know how they are feeling. Jinx imagines everyone has this; he never thinks of it as just his power. However, when Simon casts a power spell on Jinx, he removes this gift. Bereft of this extra sense, Jinx’s faith in Simon’s intentions crumbles.

Jinx still has one secret skill left. Jinx is the Listener, the one able to hear the conversation between the trees, the one who can understand the voice of the vast Urwald, even if the meanings are not always clear.

Eventually, trying to get free of their curses, the three children are imprisoned in the Bonemaster’s towering castle and the wizard decides to use Jinx to lure Simon into his power. When Simon does not come, Jinx becomes convinced his old master is as evil and uncaring as the Bonemaster, and enters his own world of sadness. Were his worst fears right?

Nevertheless, the trio try to get free. While Reven tries to find an escape route, Jinx and Elfwyn search for the Bonemaster’s souce of power. Under the castle, in a hidden cellar, they find rows of bottles. Each contains a small, silently screaming, human figure: the Bonemaster uses these captive deaths as an energy source. Then, within a second chamber, Jinx finds an even greater magical source, an object that makes him feel even more confused about Simon’s possibly wicked intentions. But the way out has been discovered!

Here comes the spoiler. Trying to protect Elfwyn while she climbs down the Ladder of Bones, Jinx falls to his death. His spirit floats above his body, floating over above the whole Urwald. From high up, he witnesses the arrival of Dame Glammer and Simon Magus. Eventually, with his power source gone, the wicked Bonemaster is imprisoned.

The grieving Simon makes sure that Jinx’s body is carried to safety. There by a reversal of the big mysterious spell, Simon returns Jinx to life again. One by one, the major conflicts are resolved, especially between the wizard and his pupil, for as Elfwyn points out, being rude and ill-mannered isn’t the same as being evil.

Personally, although I really enjoyed the early part of the story, I rather feel that the hero’s death and apparent restoration to life after sleeping for three days means that Jinx may not be a book for children who have recently had a sudden death in the family, even if the storyline is echoing the classic hero’s mythical journey structure. Maybe my reaction was because the characters had felt so very believable until that turn in the plot? And maybe top juniors are less sensitive and much tougher than I am?

To conclude, I really liked the brave and compelling young hero at the heart of this novel. I enjoyed the writing, the characters, and the magical world described within these pages, as well as the many twists and turns not yet mentioned. The ending suggests “Jinx” is intended to re-appear in more books so here’s a few good wishes to this particular wizard’s apprentice.

JINX, THE WIZARD’S APPRENTICE by Sage Blackwood.
Published in 2013 by Harper Collins (USA) and Quercus (UK)

Oh, I wish I'd thought of the curse that makes you tell the truth!
Very appetising review, Penny.

thank you for refreshing memory good summary as well