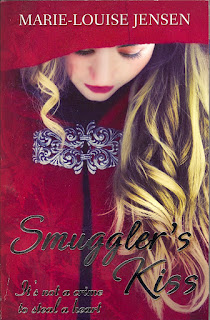 A runaway teenage girl, smugglers, romance, humour and secrets - Marie-Louise Jensen's latest novel has them all.  Her story is set around the windswept coastline of Dorset, which she describes so well that the narrative seems borne along on the movement of wind and waves.

The story begins in 1720, when fifteen-year-old Isabelle tries to drown herself and is rescued by the crew of a smugglers' ship, The Invisible.  The smugglers are forced to keep her on board for fear of being betrayed to the Revenue men.  But Isabelle is a lady, accustomed to being looked after by servants.  Spoilt and arrogant, she infuriates nearly everyone - and in particular Will, a mysterious young man who has the bearing of a gentleman, yet dresses like the other rough men and is clearly a key member of the crew.  Gradually Isabelle grows stronger and more self-reliant as Will and the captain involve her in helping with their dangerous trade; and she develops more sympathy for the harsh lives of the men, who turn to smuggling in the winter season to keep their families from starvation.  She also discovers a kinder side to Will - but their burgeoning romance still involves plenty of sparring.

The story is full of social detail from the 18th Century.  Cross-dressing girls are common in fiction, but few are as shocked and ashamed as Isabelle when she's obliged to wear men's breeches - not only used and unwashed, but in a working-man's style far below her social station.  Realistic, too, is Will's response to being 'winged' by a bullet while escaping from the Revenue officers.  Like all heroes, he says it's "only a nick" - but he bleeds heavily, turns faint, and has to lie low for a day to recover.

The secrets carried by Will and Isabelle reveal the unsavoury side of Georgian high society, in which rich men might be venturers in the contraband trade and women were chattels.  Although it touches on some very dark issues, there is nothing unsuitable here for readers of eleven or twelve upwards, and the romance is exciting but chaste.

The gradual revelation of secrets, combined with the smuggling drama, made me unwilling to put this story down, and nothing much got done around the house until I'd finished it.