A Face Like Glass by Frances Hardinge, reviewed by Cecilia Busby

The heroine of Frances Hardinge's new book, A Face Like Glass, actually has quite a normal face - it's everyone else who is odd. Discovered in his cheese tunnels by the cantankerous old cheese master, Grandible, the child Neverfell has something no one else in the underground city-world of Caverna has: a face that displays its emotions quite naturally. When Grandible first finds her, half drowned after falling into his vat of Neverfell curds, he expects a Face - a 'learned expression' - to be pasted onto her otherwise immobile features, just at it would be with any other denizen of Caverna. "I wonder which Face it will be?" he thinks. "No. 29 - Uncomprehending Fawn before Hound? No. 64 - Violet Trembling in Sudden Shower?" But the truth is that Neverfell is an outsider - she had fallen down somehow into the underground world from 'up above', where the legend has it that the relentless sun shrivels you up and peels off your skin. And her face displays a bewildering array of emotions that you can see right through to her thoughts and feelings - hence a face like glass. 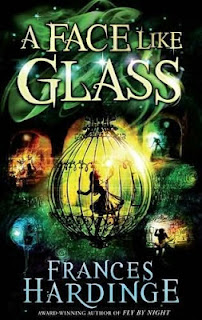 Hardinge's worlds are always wildly inventive and fantastically described, and her heroines have a wonderfully feisty ability to turn them upside down and inside out. Mosca Mye, in Hardinge's debut, Fly By Night, reminded me strongly of Dido Twite, and Hardinge's writing in general is reminiscent of Joan Aiken's - the same kind of adventurous romp, the great cast of secondary characters, the sense that you're never quite sure what disaster is going to happen next, but you know somehow the heroine will survive it in grand style. This one though, has to do a lot of work to carry the central conceit about Faces, and I found myself wondering what this idea had enabled Hardinge to do, and where it had hindered her.

In the acknowledgements for A Face Like Glass, Hardinge thanks her editors for letting her write a book "that sounds crazy even to me". It sounded crazy to me, too, and I have to admit, the premise very slightly put me off reading this one, even though I'd really enjoyed Hardinge's previous books. When I did read it, I found myself utterly gripped by the story, the writing, and the characters, and yet not totally convinced by the logic of the world she'd developed.

The inhabitants of Caverna display no emotions on their faces, yet they crave the ability to display them, and pay large sums to learn new expressions from Facesmiths, who teach them the appropriate facial positions for, say 'Contemplation of Verdigris' or 'An apprehension of Apple Boughs', as well as more complex emotions such as 'World Weary with a Hint of Sadness and a Core of Basic Integrity'.  They can choose appropriate Faces to let others know what they are feeling, or to influence them - what they cannot do is ever be sure the Face another person is displaying has anything to do with their true emotions.

This set-up works in numerous ways to enhance the book. It really allows Hardinge to have fun with the social structure of Caverna: the richer you are, the more Faces you can afford, while the drudges - the poor, the servants - have only one Face, of respectfully waiting for orders, or at the most, can add an extra eager-to-please smile. It doesn't matter how angry, upset, resentful, hungry or sad they feel, they can only ever offer their masters a Face of respect and readiness for work. Meanwhile, the rich at court play endless games of power - using their Faces to display their wealth and power, to influence others or to indicate particularly chosen emotions in the same way that an expert card player uses his aces and trumps to dominate the game.

Neverfell has the useful role of the innocent, who naively trusts everyone - who takes them completely at face value, and cannot see the hidden calculations going on behind the Faces. Much as a young child gradually learns to discern false emotions from true ones, Neverfell gradually learns to see the signs that all is not as it seems - people's deeds, in the end, don't match their Faces. But in turn, her innocent, puppyish friendliness and trust disturbs the careful balance of suspicion and mistrust that fuels these political games - and one of my favourite characters is actually the very political young aristocrat, Zouelle Childersin, who is most affected by Neverfell's blundering appearance in the middle of her plots.

Despite the ways the Faces conceit fuels the plot and the wonderful strangeness of this world, I still felt slightly unconvinced by the central idea. Wouldn't the inhabitants of Caverna have learnt to judge people by voice and body language, rather than these paid-for Faces? In which case, the faces would have become redundant - mere toys, soon discarded. Wouldn't the drudges have expressed their emotions by voice and word, or by gesture, rather than taking their fellow drudge's Face of acquiescence as some kind of real expression of their acceptance, which Hardinge suggests has prevented the spread of resistance or revolution? Why did the inhabitants even value or attempt to learn Faces linked to emotions, when there was effectively no one who displayed real emotions via their face in that world? The outsiders, who did so, were traded with but generally kept at very long arm's length. No matter how much I tried, I couldn't really see this particular aspect of the world Hardinge has created as anything but implausible, and yet without it, much of the driving force of the book is lost.

However, in the end, I was prepared to put aside my doubts about the Faces, and just enjoy the exuberant invention that makes the book such a delight - who could resist the 500-year-old ruler of Caverna, who only lets half of his mind sleep at a time, and rules non-stop as either Left -Eye (non-verbal, intuitive, slightly random) or Right-Eye (verbal, logical, scrupulously organised). Or the idea of a cheese that, if not turned and fed in exactly the right way, will explode with the force of dynamite. Or the Cartographers, the map-makers of Caverna, to whom you can only speak for a limit of five minutes before they twist your mind into the same warped madness as their own.

Read it - see what you think for yourselves. It's a romp.