Aesop’s Fables so often appear in guises and re-workings, but here, in this bold collection, one can see their importance as a literary form. Collected together, these stories show “how a fable works”. they introduce the child to purpose lying behind story, to truth within a fantasy setting, how animals can depict humans and how story – and real life - characters must be understood through action as well as speech. Such stories encourage the reader to listen well,  to think - and to learn that words can be tricky things. 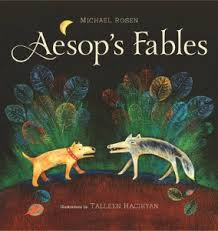 Michael Rosen’s thirteen retellings are vivid and clear. They are not over-wacky "modern” versions, but the original tales retold with exactly the right mix of description and lively speech.

Wisely, Rosen lets the tales talk for themselves. He writes so the fables read simply enough for a child to enjoy but the pieces are also perfectly voiced for reading aloud. With tales so short and neatly written, this feels like an ideal collection if you are encouraging storytelling work among children.

Of, course, there's the essential moral at the foot of each story. These are told in a direct way that children  - and others - can understand: “Don’t get carried away when people tell you that you’re brilliant or beautiful. They maybe saying it just so they can get something from you.” As the cheeseless Crow now knows!

I did like holding this particular hardback collection. It is very satisfying when a book is a comfortable size to hold, especially when you are reading with or to children.  The layout is pleasing too. The font is elegant, there is space on the page and every illustration gets full attention. The spreads consist of one full-page picture and one story, set out page by page, which would also make the book work well on a stand or as part of a display too.

Taleen Hacikyan, the Canadian illustrator, has made the book both beautiful and rather unusual. Her leafy endpapers introduce the reader to the strange dark natural setting of Aesop’s tales. Within, Hacikyan's rich palette and dark backgrounds make striking, “ageless” pictures, ren=minding the reader that these fables are for far more than nurseries. The semi-primitive drawings have a dream-like quality, lightened by a sense of movement and humour. So the Cockerels are undeniably bright and cheery on their dark background, while the lean and hungry Fox yearns upwards towards a Bunch of Grapes so desirable that they almost fill the page. In the clever illustration of the Wolf and Lamb, conversing on the river bank, the reflection of the wolf already shows the lamb within its belly. “Moral: People who are out to get you will come up with all kinds of excuses for bringing you down. But at the end of the day, they’ll try and get you anyway.”

I don’t want to come over all Gove-alike here, believe me, but I do think that Aesop’s fables are a part of core cultural knowledge, whether heard or told or read. Vivian French and Korky Paul’s “Aesops Funky Fables” has long been a favourite version, particularly because of the clever wordplay, but  Rosen’s clear and beautiful Aesop’s Fables will certainly become part of my school & storytelling collection as well.

I rather wished there could have been a List of Contents although not having one does mean a reader might read the whole book, but there is a nice biography of Aesop at the back. There's also information about how this book was funded by the Canadian Council for the Arts and the British Columbia Arts Council. So nice to know such things happen somewhere, if not here . . .

To ned with, here’s a delightfully confident Mouse – as well as a flavour of Rosen’s confident telling.

Mouse was scampering to and fro, back and forth, fetch and carry: too busy to notice that he’d run over Lion’s tail. Lion woke up with a roar and seized Mouse in his great paw. He was just about to pop Mouse into his mouth, a tasty little nibble, when Mouse called out: “Don’t eat me, Lion. If you let me go, I promise I’ll do you a favour one day. Believe me, I will.”


Lion roared out laughing. “You? A little scrap of a thing? You couldn’t help a massive beast like me. Now off you go, you cheeky little critter, before I throw you down my throat.”

This sounds like a lovely, classic book, Penny, and perfect for a gift. I shall be buying it.