Phoenix Yard Books is a new publishing house, and a winner of the IPG Award for Best Newcomer Publisher. Its speciality is books in translation. They have published some British writers, such as Geraldine McCaughrean and........... but in general their output is from abroad. They do bring out fiction for younger readers, such as the delightful ARTHUR series by Johanne Mercier, translated by the redoubtable Daniel Hahn, and are set to publish more in future, I believe. I'm concentrating on three picture books, because in this field and for those who are unfamiliar with illustration styles in other countries, their list is an education. To a British eye, even one trained up in graphic innovation by artists such as Lauren Child, the look is one of utmost sophistication and also subtle difference from our output in this field. The images in the three books highlighted below are beautiful. Whether they will suit children who are used to prettier, less edgy fare I'm not clear about, but I loved them and thought it worth while bringing the whole list to your attention.It should be said that one characteristic of these three books is that they are for really rather older children and their parents and not the very youngest readers. Phoenix Yard Books have a website, which is well worth a visit. 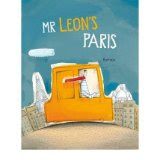 First up is MR.LEON'S PARIS by Barroux, who's responsible for both text and pictures. Sarah Ardizzone is the translator. The endpapers in themselves are marvels. The whole of the inside front cover is scribbled over with Parisian street names. If you had a magnifying glass and knew the city at all well, you could spend many happy hours looking for places you might recognize. There's not a scrap of white space anywhere to be seen. The inside back cover is a beautifully-drawn map of the city with the (real) streets Mr Leon visits highlighted in red. In between, Mr Leon takes strange people - the Devil, lovers, angels, ordinary mortals from all over the world - to appropriately-named streets. Henry the Handyman wants to go Hammer Yard and Jeanette the hairdresser lives in Scissor Row. The journeys might be real or maybe they're imaginary or symbolic or six of one and half a dozen of the other. What Barroux is saying is: Paris encompasses the whole universe, real and imaginary and there are many kinds of people in it, from every corner of the globe. The end of the book is enigmatic. Mr Leon stops driving his cab and sets off in a ship to Liberty Street and possibly the moon. His last passengers are angels. Does that mean he's dead? Or simply retired? It's not often a picture book can generate a philosophical discussion but this one will. Through the windows of the cab, as it drives through Paris, we get tantalizing glimpses of the streets. Just the thing, this book, for anyone older than about 8, setting out for a holiday in the French capital, who enjoys maps, magic and unusual journeys.

Next comes HAPPINESS IS A WATERMELON ON YOUR HEAD by Stella Dreis from Brazil. Daniel Hahn is the translator and he's done a grand job of expressing a mad, colourful, whirling dervish of a text. The pictures explode in colour and movement all through the pages and the cartoon-like people are outlandish, strange, and manage to be both beautiful and ugly at the same time: a winning combination. It's the style we're somewhat familiar with in certain advertisements on television,(Lloyd's Bank, eg) and they're either your thing or they're not but in this context, they work very well indeed. It's worth going to a well-known online books website to take advantage of the LOOK INSIDE facility in the case of all these books. 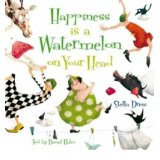 Then we have I HAVE THE RIGHT TO BE A CHILD by Alain Serres and translated by Sarah Ardizzone. 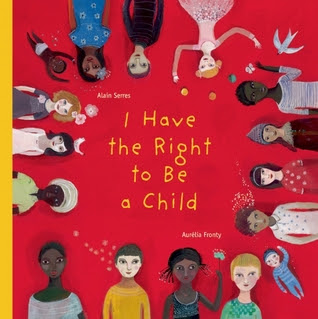 This book is intended, say the publishers, to be a resource for discussion but it's a lot more than that. It outlines the rights of children and illustrates them most beautifully. Of all the books I've discussed, this is the one most likely to appeal visually to most people. The colours are rich, the illustrations have a touch of the Jane Rays about them and every spread is worth lingering over and looking at and thinking about. Amnesty International endorses the book's message, that of course children have rights and they must be upheld in every country. I think this book should be there on every school library shelf and in every possible home. It's a tremendous piece of work and congratulations to Phoenix Yard books for this and the rest of its chic, unusual and interesing output.

ALL THREE BOOKS: Published by Phoenix Yard Books in pbk.

HAPPINESS IS A WATERMELON ON YOUR HEAD: £6.99

This sounds really interesting - am going to look at the website. They sound as if they could be just the right level for a certain grandson...

Thanks for a review introducing such a fine list of books & translations, Adele. Mr Leon's Paris is intriguing me already.

I couldn't get to the website from here, but easily searched and found it on the internet.
http://www.phoenixyardbooks.com/