A month ago, an eleven-year-old boy from our local secondary school won the CILIP Carnegie Shadowing Haiku competition ( http://www.alcs.co.uk/ALCS-News/June-2013/ALCS-News-Bulletin-June-2013/Carnegie-Winner-piece). This was his haiku:

In my possession
I have a word soup, jumbled
Into little grains

The poem is about the experience of dyslexia - apt, in a year in which the Carnegie was won by Sally Gardner, herself dyslexic, and her book, Maggot Moon, which features a main character unable to read or write. My review today relates to the same subject - its not about any one book, but about access to reading for those with dyslexia. 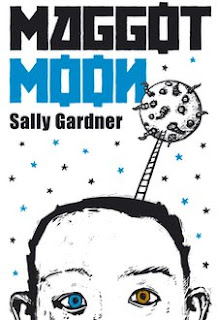 Sally Gardner deliberately wrote Maggot Moon with short chapters, because she could remember how frustrating it was as a child to be asked, "What chapter have you got to now?" and having to admit that she was still on the same one. It's a problem my daughter would identify with. At ten, she has not yet been diagnosed, but it's looking very much as if her reading problems are related to some form of dyslexia. When she saw James Cutler's haiku, above, she said: "That's exactly what it's like! Exactly what it feels like, looking at a page of words..." Izzy is ten, and while she loves books, her slow reading speed has made it very hard for her to access the kinds of books she would ideally like to read - the ones that engage her intellectually and emotionally. They take too long to read, the print is too small, the lines too close together. On the other hand, the books she could manage strike her generally as too simplistic, too dull, or too silly. So she tends to struggle through the longer books, but it's a painful process, and it's all too easy to give up.

Recently, however, we've discovered a device that has made a phenomenal difference to Izzy's ability to access the books she wants to read, and to successfully negotiate that 'word soup'. The device she uses is a Kindle Fire, but in fact most e-readers can perform the same functions - the key is the ability to increase font size, and the use of a text-to-voice application.  When we first got her a kindle, for its ability to increase font size, it did help her read books she otherwise found difficult - it cut down the number of times she mixed words up or skipped lines. But the biggest revelation - and one she discovered herself - was the 'voice' function. With headphones in, the rather robotic voice that 'reads' the displayed text confirmed for her what each word was as she read it. As she put it to me: "It's like using stabilisers on a bicycle." The voice supports her when she hits a word that would otherwise make her stumble, it keeps her going at a steady speed, and it allows her to 'read' at a pace that keeps the story flowing and exciting. At the moment, she's reading Gillian Cross's dystopian novel, After Tomorrow - and has amazed us and herself by how far she's got through it already. 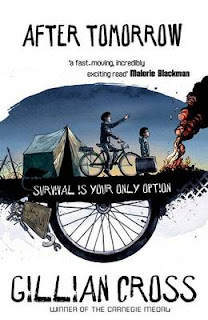 At first, I was a little sceptical about her using the voice function - how could this monotonous voice enhance the imaginative side of reading? Was it even reading, really? But talking to her, and seeing the pleasure she's getting from the experience, has converted me. In many ways the monotone seems to act a little like the plain black-and-white words on the-page to a fast/automatic reader - just as such a reader turns that sterile code not into individual 'words' in their head but into a whole colourful scene of characters and events, so a dyslexic reader can take the monotone voice, alongside the words, and convert it into 'seen' action. In this sense it is very different to audio books (which my daughter also enjoys), and much more like the experience of 'normal' reading - with work and input required from your own individual imagination.

There are a number of text-to-voice applications for e-readers (a list is available here:
http://atcoalition.org/article/accessibility-and-e-readers) but they are mostly aimed at people with visual impairments. I've not seen them recommended for dyslexics before. I hope this review might encourage a few people to try the technology for their children - for Izzy, it's opened up a whole world of more technically difficult reads, and a hugely affirming level of personal control over her reading.

This year my teen daughter started using the Kindle android app on her smartphone. Previously she'd begin books but never finished them. Now she is getting through lots of adult novels and I noticed she uses the option of white text on a black background. Looks weird to me, but she says it's easier to read (she's dyslexic).