AFTER THE SNOW by S.D.Crockett. Reviewed by Pauline Chandler.


Not another dystopia story! Not another tale about a hopeless future, after we’ve destroyed the planet!  Yes, “After the Snow” is set in a harsh future, but don’t miss it:  it’s a deceptively simple adventure story, highly enjoyable as a quest story, which yet highlights deeper issues about types of government, survival skills, trade, barter, money, justice, as well as fundamental human relationships. 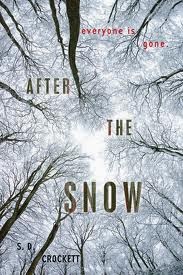 Told in the distinctive voice – part boy, part primitive hunter - of the main character, Willo, the story follows Willo’s quest to find his family, who have been taken away, by harsh government forces. Kidnap and death are commonplace, in this snow-covered world, and Willo is frightened, but, with great courage and resourcefulness, he sets out to find them.  “After the Snow” is really the story of Willo’s coming-of-age on this quest.

Born after ‘the sea stop working and the snow fall and fall and fall’, Willo doesn’t know much about the world ‘Before.’ His skills are making fire, storing food, trapping animals and, especially, in making fur clothes, something which stands him in very good stead on his quest.  I always enjoy scenes where people are working and using their hands to make things, so this part especially appealed to me.

I also loved Willo’s character, his resilience and also his very human doubts, that make him so appealing. Early on in his quest he comes across two abandoned children, who will certainly die without his help. His head tells him that he will have to leave them behind. He doesn’t have enough food to share and they will hold him back on the trail, so he moves on, but his heart makes him go back for them. By this time the younger one is dead and the older one, a girl, has difficulty leaving him. These are harrowing scenes, but the author handles them with fine sensitivity.

There are other scenes in the book, also not for the fainthearted. At one point Willo is thrown into prison, cruelly treated and made to witness an execution, but the emphasis is on Willo’s refusal to give in to tyranny, a strength he needs to fight the regime.

Willo’s father appears only in memories and words in the book. Willo remembers that his dad called him a ‘beacon of hope’. It’s not until the surprising ending to the story that Willo, and the reader, knows why.

A thought-provoking and exciting story, which gripped me from the start.