THE QUIETNESS by Alison Rattle - reviewed by Dawn McNiff

THE QUIETNESS  by Alison Rattle
Reviewed by Dawn McNiff 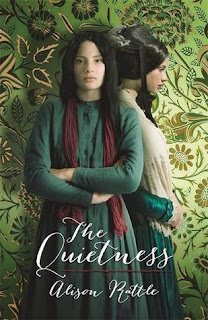 An historical YA novel, published by Hot Key Books in 2013.

This grippingly-told story is set in Victorian London in 1870, and like Jamila Gavin's Coram Boy, its subject is harrowing and shocking - the underground, murderous baby-trading of centuries past.

So unsurprisingly, there are some pretty adult themes in this book - prostitution, child-birth and infanticide. It's full-on, but without being graphic. An affecting but unsentimental depiction of life back then.

And the novel is all the more compelling because it's based on a true story. Alison was inspired by an actual court record taken at the trial of two 19th century baby-killers. Here she came across a first-person account by the accused women's 15 year old assistant, and this became the voice of Queenie, one of book's main characters.

So the novel is a troubling read at times. A scene when a newborn is taken from its mother against her will made me go cold and goose-bumpy - you really feel the girl's wild, desperate panic. Ugh, so chilling. Such misery. But VERY well-done.

The story told from perspective of two teen girls - Ellen and Queenie - as dual narrators in alternate chapters. I think this works very well to keep the reader guessing until the stories finally converge. I did see a few of the twists and turns coming, but not many (and definitely not the ending) And I didn't get into the book straight away, but before long I was whipping through the pages, hungry for the story.

There are some well-used, story motifs in this novel - rich girl/poor girl; reversal of fortunes; characters unknowingly sharing a secret past. But Alison's direct, unblinking style, vivid scene-setting, and compelling voices means the novel feels fresh.

And it leaves us with some serious questions - about the responsibility of minors and by-standers. I think it's a clever study of denial, and also shows us how extreme adversity can sit us on the sharp point of difficult, moral choices.

But there is a dose of hope too, and some happier themes- family loyalty, forgiveness, friendship and transcending love.

It is in essence a story about women - and their struggles and deep bonds. The men in the book don't get great press. They are nearly all cruel, self-serving and manipulative. The best of the bunch are Queenie's brother, who's a decent sort, if only briefly sketched at the end; and Queenie's father, who is flaky in the extreme, but affable and big-hearted.

And the ending?... Well, I threw myself back on my pillow with a wail...it's not a happy-ever-after for everyone.

This is Alison's debut as a YA author, and I say - hats off and hurrah. Looking forward to many more.


Return to REVIEWS HOMEPAGE
Posted by Unknown at 07:00 Permalink

Thank you for highlighting this YA book, Dawn. The Quietness sounds an impressive and compelling debut.