A GAME OF THRONES by George R. R. Martin. Reviewed by Ann Turnbull. 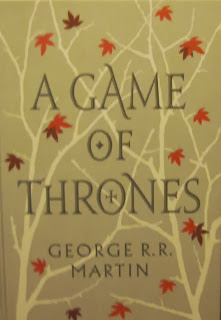 I don't watch much TV, but even I have become aware of a popular TV series called Game of Thrones, though I have never seen it.  This review relates only to the book by George R. R. Martin, which I was very surprised to receive for my birthday, in a beautiful hardback edition.

The book is huge.  You need to rest it on a table or a pile of cushions.  It has several pages of maps with place names reminiscent of The Lord of the Rings.  There is also an Appendix with nineteen pages of characters.  All this daunted me somewhat.  But once I got started I was hooked.  The writing is excellent; the numerous characters are interesting and their connections to each other soon become clear; and the action unfolds at just the right pace.  Although there is a fantasy element, it's not at the forefront, and when it does occur it is all the more terrifying.

This is a saga about the struggle for domination between several great houses, set in an incredibly detailed medieval-type society.  Martin's characters, both male and female, burn strong and clear in the imagination, and their actions drive the story.  Outcomes are uncertain.  Good people may be betrayed, injured, exiled or murdered.  The story is full of shocks and surprises, and the conclusion builds to an amazing scene of power and transformation.

Martin presents us with an entire world imagined down to the last detail, including language, heraldry and history.  For those with time, there are six more books and plenty of characters and threads to pick up and follow.  I can imagine it could well become addictive.  Although it's written for adults, I think it would appeal greatly to many older teenagers.

Return to REVIEWS HOMEPAGE
Posted by Ann Turnbull at 06:30 Permalink

Aha! You will not be able to stop till you have read all these books one after the other. Totally addictive. And you omitted the most important thing about G.R.R. Martin, which is that he is utterly unafraid to kill off his main characters... You have been warned. (I will just add - I only watched the first two episodes of the first series on TV but I came to the conclusion I didn't want my strong relationship with the book's characters spoiled by inevitably having them overlaid with actors versions, even if they were Sean Bean...)

Having read this positive review from you, Ann, I feel inspired to look for "Game of Thrones. I'd previously felt a bit negative towards it because of the apparent popularity. Not a snobby response, but there's times when I worry about not hearing the book because of the roar of other (often media) voices. Thanks for the "stay with the book" advice too, Celia, even if you offer temptation..

What Celia said. You're doomed! After the first one, I couldn't stop till I'd read them all (so far). It's rare to find a series where you can get so emotionally involved with *so many* of the characters (to the point you're yelling at them every second chapter). And if you do ever succumb to the TV series, you have every chance of loving it – it's fabulous. Especially for Tyrion, Jaime and Tywin Lannister, who are almost better than they are in the books.

Tywin? Have I met him? I found the best way to get to grips with all the characters and places was not to worry too much and just go with the flow (this was how I coped with "he" in Wolf Hall). And it helped to buy the e-book so that I could continue reading on long journeys. I preferred the hardback book, but has anyone found a way of reading it with a large cat on their lap?

An awesome read for all fantasy lovers! The only series that I can think of in the likes of LotR. The best part is, the story telling does not roam around a preconceived notion of good and evil like most do. Its all in the game ;)