Dark Lord: The Teenage Years won the 2012 Roald Dahl Funny Prize, and it doesn't disappoint. The premise is brilliant - the Dark Lord, Incarnation of Evil, World Burner, master of the Iron Tower of Despair, has been sent to another plane by an incredibly powerful spell cast by the White Wizard, Hasdruban. In fact, he has been sent to our world, in the body of a puny teenage boy. No Gauntlets of Ineluctable Destruction on his hands, no tusks, no fangs, no spell of Agonizing Obedience. 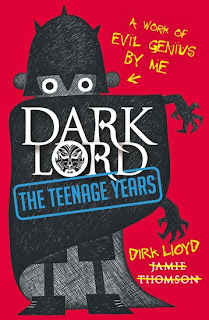 The Dark Lord appears in a supermarket car park ("Saveco - was he the local overlord perhaps? Lord Saveco, Smiter of Foes, the Pitiless One?"). He is picked up by the police, who mistake his name for Dirk Lloyd, and who treat him as a lost boy with a mental disturbance that takes the form of fantasising that he's the Evil One ("These computer games. It's an obsession at their age"). He's packed off to be fostered by the Purejoies, who have a teenage son of their own, Chris.

There is lots of fun to be had with this notion - imagine Darth Vader/Sauron combined in the body of a teenage boy, with their threats of revenge and terrible destruction eliciting no more than: "There, there, dear, you'll feel better soon." But it could potentially be a bit of a one-joke book, and there's only so much you can have your character rage about the loss of their powers or threaten those they come into contact with ("puny humans") with all manner of terrible torture that they can't actually carry out (though these things are very funny, and done well).  That it's a book that satisfies on other levels as well as making you laugh is down to the way Thomson handles the Dark Lord's growing relationships with the humans he encounters: particularly his foster-brother, Chris, and Suze, the Goth girl who's Chris's friend at school. They play along with Dirk's fantasies about being the Dark Lord, and enjoy the sense of being part of something out of the ordinary, without really quite believing him; he, in turn, starts to experience feelings he'd never allowed himself as the Dark Lord - friendship, affection, guilt at hurting people or letting them down.

I really enjoyed seeing the way Dirk gradually comes to terms with the requirements of the modern world and learns to get by without losing too much of what makes him funny as a character. Dirk, for example, becomes vital to the success of the school cricket team, because of his excellent strategic battle skills, and thus earns the friendship of Sal Malik, cricket team captain. Sal becomes another of the little group dedicated to finding a way to send Dirk back to his own dimension.

Finding a way to send Dirk home becomes the driving force of much of the plot, and has some unexpected consequences. The ending is great, and sets us up nicely for the sequel, Dark Lord: A Friend in Need. Which is what I'll be reading next.


C.J. Busby is the author of a fantasy series for age 7-9, Frogspell and sequels (see www.frogspell.co.uk)
The first book in her new series, Deep Amber, will be published by Templar in March 2014.
Twitter: @ceciliabusby


Return to REVIEWS HOMEPAGE
Posted by C.J.Busby at 06:00 Permalink

I'm going straight out to buy that for my own teenage Dark Lord...

Sounds fun. What age is it for, do you think?