HAPPY CHRISTMAS and THE COMPANY OF GHOSTS by Berlie Doherty, reviewed by Adele Geras.

With this review of a wonderfully seasonal book, Awfully Big Review pauses for a while. Thank you for reading our 2013 reviews - and we will be back with more on the First of January 2014. A happy holiday to you all!


Meanwhile, from Adele Geras . . .
THE COMPANY OF GHOSTS by Berlie Doherty

A new novel from Berlie Doherty is always something to look forward to and yet again I have to offer a disclaimer. This writer, like so many of those I review on this website, is a friend of mine and I’m sorry about that, but if I had to avoid books by people I know, I’d be very hamstrung in the matter of reviewing and would scarcely ever be able to do it. As it is, showing good new books to readers who might otherwise miss them is something I regard as one of my main functions as a critic.

This is a ghost story and I love ghost stories, so I seized on it when it came through my door. Doherty has opted for a particular kind of tale. There are no big old houses here with creaking doors; no graveyards, no rattling chains and indeed most of the accoutrements of the traditional story are absent and instead we have an idyllic (in many ways) island off the Scottish coast and a teenager marooned there all by herself. 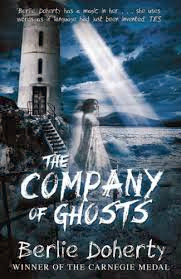 Ellie is running away from an unpleasant situation at home when she accepts an invitation from Morag, whom she scarcely knows, to spend some time on the island. This place is deserted. Morag’s family spend holidays there in a very basic dwelling and there’s a disused lighthouse but apart from that, nothing. It’s reached by boat, and that is an erratic sort of service, down to the availability of a local fisherman.  Circumstances combine to leave Ellie alone there for what she thinks will be only a short time but which, terrifiyingly, extends and extends until we realize, gradually, that through various accidents, no one is going to come and rescue her. She is on her own, having to cope, desperately scared at times and trying to be sensible and brave in really scary circumstances.


This would be bad enough, but of course, we know from the title that Ellie is not alone…..there is the ghost. The way Doherty introduces this spectre, the way the supernatural is interwoven with the natural is both spine chilling and lyrical. She specializes in wonderful descriptions of nature and in this case, because our heroine is an artistic child, of her paintings as well. Ellie writes letters to her father, who, in her opinion, has deserted her family to go off to Cornwall on his own leaving her mother to marry someone else and these letters, interspersed with what’s happening on the mainland to George, Morag’s brother, who, through no fault of his own, has failed to arrange Ellie’s rescue, both ease the tension on the island and also rachet it up a few notches as the novel progresses.

The story of the ghost turns out to be a love story, and towards the end, we sense that Ellie’s narrative, too may be moving in that direction….


This is a book full of  moments of really creepy suspense and I’d recommend it to anyone who wants something both unusual and romantic and set in a landscape which is at the same time threatening and very beautiful. It’s a well-written, intriguing and often genuinely scary story, just right for Christmas.

Sounds just right for this time of year, Adele! A Solstice treat. Thank you!