BELLMAN AND BLACK by DIANE SETTERFIELD, reviewed by Adele Geras.


We're welcoming in 2014 with another review by Adele Geras.

This time the book is BELLMAN AND BLACK by Diane Setterfield, a historical novel for adults.

The review first appeared in THE VIRTUAL VICTORIAN, author Essie Fox's fascinating history blog, which is well worth a visit .


A dramatised version of Diane Setterfield's first novel, THE THIRTEENTH TALE, was shown on tv over the Christmas period, and might be ideal catch-up-tv for grown-up viewing on a lazy grey day like today, the first of January.

Adele Geras writes:
This novel, the second from the writer of the thrilling and very popular THE THIRTEENTH TALE is shorter, less thrilling but oh, how much more haunting and moving and altogether more memorable than its predecessor. 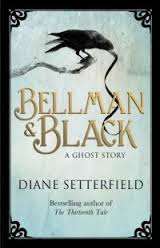 I have been haunted by it since I read it for the first time some weeks ago.  I don't often reread books. There are too many new and exciting things being published all the time for me to want to go back to something I already know.
I made an exception for this book, because I was reviewing it. I must try and convey what it is about B&B that has so got under my skin without giving away too much of the plot. Although it's fair to say that the twists of the plot, on the face of it, are not Setterfield's main concern.
This is  the story of a man, William Bellman, who succeeds in all his does in life, and who even though he loses much, is also a provider of work for his fellow man, a devoted father, a very diligent and obsessive worker who stops at nothing to perfect whatever enterprise he is engaged in. He also becomes extremely rich. There are tragedies in his life. There are shimmering triumphs. And there is also something that infects his every thought and deed.

In a short first chapter, which is easily the match of Ian McEwan's famous ballooning scene at the beginning of ENDURING LOVE, William kills a rook with a catapult. He is ten years old. This murder...because that's how he feels it and so how we do too...threads its way through the whole narrative. The dead rook is like  black ink dropped into clear water. It colours every page.

On a plot level, the dead rook haunts Will as first as a figure dressed in black on the edge of any funeral he attends. Later,  a man dressed in black makes a kind of Faustian pact with him and Will recognises this person from glimpses he's had of him before. He calls him Black and agrees to open a Mourning Emporium at his suggestion. This is a second business enterprise for Will. He'd already turned a  mill where he worked into a real success, creating colours that sang, and fabrics that were greatly in demand. Now, to save the life of his beloved daughter Dora, he goes to London and a shop called Bellman &Black is born.

Detail. That's what marks this novel out as unusual. We learn everything about both the mill and the shop. We have Will's life itemised and inventoried.  Will lives and dies. Dora lives.  The rooks go on and on forever and the last few pages of the book are simply beautiful: a description of the birds gathering and swirling through the sky and then settling on branches, seen by Dora, the artist, who will then, we know, always see them and always try to convey the beauty and terror of that moment. The book ends with a monologue from the rook-voice which has accompanied us through the story. I haven't mentioned that before now, fearing that a novel in which  one of the points of view is that of a rook, might not be everyone's cup of tea. Please don't be put off. You will be enchanted by the rook-lore and feel yourself initiated into a secret world that other people don't know about.

This isn't, in spite of what it says on the very beautiful cover, a Ghost Story.  You will find no revenants, or at least, none of the kind you might expect. No rattling chains. No headless horsemen. It's much more about psychology; about what goes on in Will's mind, and yet of course in many ways, the Mourning Emporium is by definition a haunted house

The prose feels Victorian. It's plain, elegant and pared down.  The accumulation of detail about processes, fabrics, landscape and buildings is very powerful and creates a world that stays with you long after you've finished the book. There are people, characters, interactions between them (the relationship between Will and his wife is particularly tenderly drawn as is the parallel relationship between Will and one of the seamstresses in the shop) but this isn't a novel about people's feelings and romances and disappointments. It's about the soaring parabola of a very simple story: the consequences of the single, dreadful act we witness  in the first few pages. That slingshot starts Will on a journey through life that he can neither avoid nor alter. We follow him. We listen to the rook.  It's a stunning novel and  perfect for this time of year. It's one that I am sure will haunt you as it haunts me. And you won't look at rooks again without a shiver going up your spine.

http://www.adelegeras.com/
I blog at History Girls (http://the-history-girls.blogspot.com) , a joint blog written by authors of historical fiction and fantasy history for Junior (middle Grade), YA and adult readers.

Return to REVIEWS HOMEPAGE
Posted by Penny Dolan at 11:07 Permalink