Everything is Fine by Cathy Brett reveiw by Lynda Waterhouse 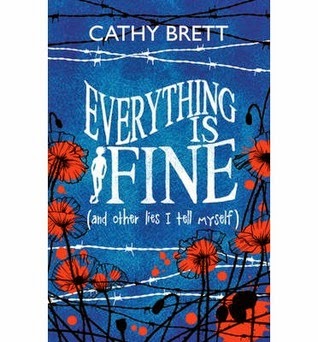 Everything is fine is an illustrated novel as opposed to a novel with illustrations. The visuals give the story the immediacy and intensity of a graphic novel. There is also fluidity to the page layout which perfectly matches the voice of the narrator, fifteen year old Esther Armstrong. Words literally swirl and dance off the page.
Everything is not fine for Esther. She is missing her brother Max, her parents are constantly arguing and money is in short supply. She feels trapped in the small seaside town of .
Things start to change when Esther finds some letters hidden in her room. They have been sent by a soldier, Freddie, to his sweetheart from the trenches of the WW1. Esther is consumed with a desire to find out if Freddie survived.
At the same time a film crew moves in to her home including the handsome and self-centred Byron. As they begin filming a storm is literally brewing and Esther is forced to stop lying to herself and face some painful truths.
This is a powerful novel of love and loss. There are no easy answers, or tidy happy endings, for either Freddie or Esther.
ISBN 9780755379491
Published by Headline


Return to REVIEWS HOMEPAGE
Posted by Lynda Waterhouse at 07:53 Permalink