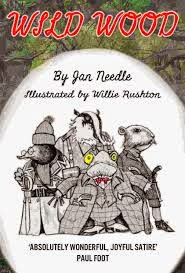 The reissue of this marvellous novel must rank as a Literary Event. First published in 1981 by Andre Deutsch with unforgettably brilliant illustrations by Wiiliam Rushton, Wild Wood should have been widely recognised for the classic book it undoubtedly is instead of going out of print early.
Well, to some of us, it always has been a classic and its reissue, revised and even improved, after nearly forty-five years, is an occasion to celebrate.
It’s not a sequel to The Wind in the Willows. It’s not a retelling in any but the vaguest sense. It’s a complete re-imagining, a companion piece, almost a concordance to the original, as Tom Stoppard’s Rosencrantz and Guildenstern are Dead is to Hamlet.

Oh, in Wind in the Willows, how disturbed Ratty, Mole and even Mr Badger are by the Wild Wood. It’s a place of evil, fear, intimidation and danger which we as readers, feel tangibly with Mole as he nervously traverses it. Stoats and weasels are threatening, nightmare creatures who disturb dreams. They are, if you’ll excuse the word, oiks. The privileged upper class Riverbankers never think that the wild Wood may contain a viable, relatively comfortable and unthreatening society – unthreatening unless they themselves feel threatened. Well, they do feel threatened. We’re seeing Wind in the Willows from the Wildwooders’ point of view and it’s not hard to realise that this is a novel about class and revolution and a valuable social document about Edwardian society. 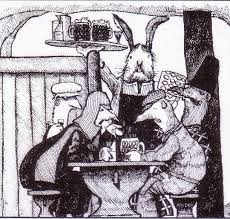 The tale is told by Baxter Ferret, an unassuming animal, a sort of wide-eyed Everyman who stands slightly apart from the main action with an engagingly critical semi-detachment. He loves his cars, his machinery, his family and his beer. Old cars and home brewing are among the novel’s main preoccupations and part of the warm, protective, though often cold and hungry world of the Wood.

Concealed beer jokes abound. For example, the professional agitator who arrives to spark the Wildwooders into revolution is Boddington Stoat, who is ‘peculiarly yellow, a little lacking in body, extremely bitter but one of the best.’ Anyone who has spent time in a Manchester pub will know exactly what Jan Needle is talking about. Baxter’s first ‘gaffer’ on the farm has a petrol wagon, a Throckmorton Squeezer ‘with …six cylinders each big enough to boil Cider in.” Cedric Willoughby, the ancient journalist, drives an ‘Armstrong Hardcastle Mouton Special Eight. 1907 with the whirling poppets…’ Such madly exaggerated machines populate the story. Yes, it’s full of loving detail of a tightly-knit working class society. Yet the Riverbankers are not entirely excoriated. Baxter may dismiss Ratty as a poetic sort of dreamer but there’s a measure of affection there.
However, it’s much more than that. As a satire, Wild Wood is on a par with Animal Farm. Both recount flawed revolutions. Yes, the Wildwooders do take over Toad Hall, rename it Brotherhood Hall, and the egregious Toad - a creation as gross as the Toad Grahame creates, still funny but also a symbol of repression - is driven out. But, unlike Orwell’s revolution, this is one is not entirely successful. Grahame’s narrative cannot be tampered with. The revolutionaries settle for less than domination. Boddington’s fanaticism is tempered as he marries Baxter’s sister Dolly. We know that Mr Toad will return. The revolution peters out rather good-naturedly with a sort of rapprochement between Riverbankers and the Wildwooders, the upper class and the working class. We can look round us nowadays and say ‘If only it had lasted!’ 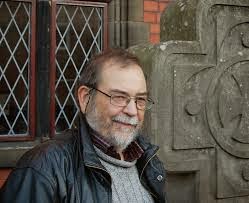 Funny, profound, superbly written, deeply satisfying: Wild Wood has so many qualities. Perhaps the book didn’t make the impact it should in 1981 because staunch Grahame supporters thought it disrespectful. Far from it. As with all good satires, there is a strong element of homage to the original. The Wind in the Willows is a quintessentially British book.

Even though it springs from a radically different social and political perspective, so is Wild Wood. Read it, cry with laughter and close it knowing that the two books together have provided you with a conspectus of a whole society in a particular age but still relevant for all of time.

Thanks to Authors Electric for this portrait of Jan Needle. Another excellent blog to visit!

Sounds interesting. Now I'll have to get my hands on a copy...