Go Green! is published by the Royal Yachting Association as part of a series of instructional books by the illustrator / sailor Claudia Myatt . The series began with Go Sailing! an introduction to dinghy sailing that has been a world wide success and is as wonderfully clear for adult beginners as it is for the children who are its primary audience. Then came Go Cruising! Go Inland! Go Windsurfing! + various associated activity books.

Go Green! is the odd one out in this energetic company.  It's a plea for the Blue Planet: an environmental book which will be accessible to the youngest readers and yet includes memorable facts and clear explanations that will do no harm at all to older members of the family. I believe it should find a space in all primary school libraries and holidaymakers off for their annual seaside jolly or luxury cruise should make sure they pack a copy. In fact, if Go Green!'s message is fully taken on board (pun intentional) a copy should be placed beside every lavatory in the land.

“What do the oceans do for us?” asks Go Green! – “and what do we need to do for the oceans?” It begins at the beginning with the earth as a hot waterless lump of rock covered by a cloud of dust and gases and ultimately, I suppose, its mission is to stop us returning to some similar state. I've never been good with geology so I felt clarified rather than patronised when I looked at a drawing of those early continents, Panthalassa and Pangea, and read Myatt's description of the land as being “like bits of toast floating on a bowl of thick molten rock soup”. Did you know that America and Europe are still drifting apart at the rate of 2cm per year? I didn't.

The scientific basis for Go Green! comes from Dr Susie Tomson who was inspired to become an environmentalist by the seaside holidays of her childhood. The lively drawings, bad jokes and memorably clear explanations are all Claudia Myatt's. They make the book palatable and pleasureable without diluting the main message. A cheery heading such as “Twinkle, Twinkle Little Squid”, for instance, helps a word like bioluminescnce to trip off the tongue with no trouble at all. Go Green! is a little like the Horrible Geography series but it's accessible to a far younger age group. My five-year-old grandchildren have been composing letters to Greenpeace in school this term. Go Green! could have been written for them – while at the same time offering me the chance to field such innocently tricky questions such as “why does seawater taste salty?” 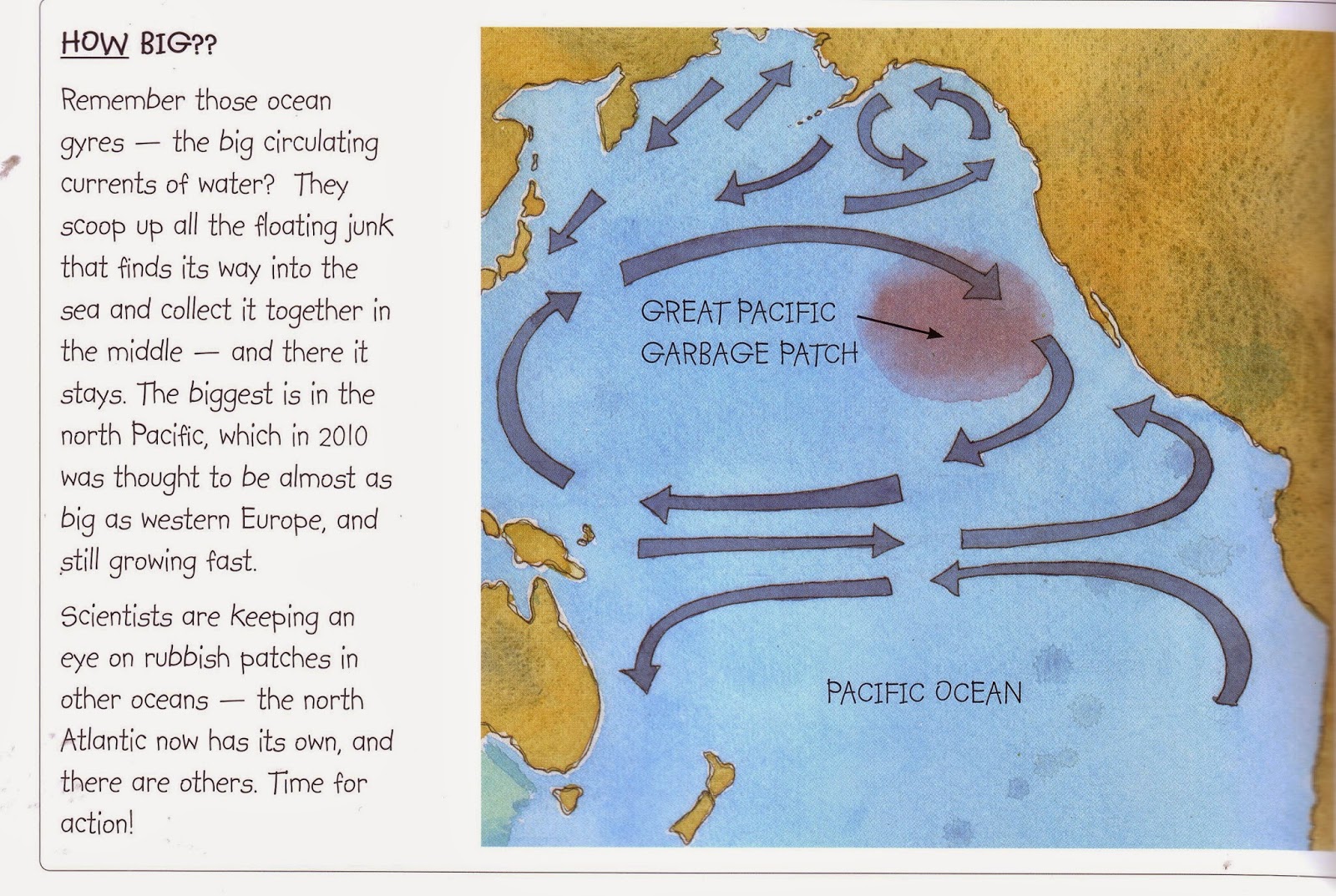 Claudia Myatt is the daughter of a meteorologist. Her colourful diagrams of trade winds and ocean currents leads convincingly into an understanding of the Great Pacific Garbage patch which in 2010 "was thought to be almost as big as Western Europe.” Plastic is the major villain of Go Green!   “Bodies of dead sea birds are found full of plastic, baby birds are fed pieces of plastic by their parents and then die of starvation.”

Glass and some types of plastic may take as long as 500 years to degrade but there's nothing reassuring about this. The long process begins as soon as the plastic finds its way into the sea “until it becomes tiny particles suspended in the water – a kind of plastic chemical soup. It's now possible that there is more plastic in the sea than plankton. Some of that chemical soup ends up inside fish of course and gets into the food chain. And guess who eats some of that fish? That's right – you and me.”

The obvious temptation is to blame sailors for polluting the oceans. Go Green! is firm about the Marine Code of Conduct that sailing children should make their parents follow.  “We do not throw anything overboard” is Number One. However the vast majority of the rubbish in the sea has arrived there from the land. Don't throw it away, says Go Green! Reduce, reuse, recycle. Even landfill is better than allowing litter to reach the sea. THERE IS NO SUCH PLACE AS 'AWAY'.

Go Green! is a crusading book but it also including some charming pages of birds and shells and other “beach treasures”. Myatt wants children to waggle their toes in rockpools or blag their way onto square-rigged ships. She also wants them (and us) to treat the watery world with care and respect. The final fact I'll take away from Go Green! is that there is NO NEW WATER. It changes its form – vapour, liquid, solid – and may also change its distribution pattern but the total quantity remains the same. 97% of (liquid) water is in the sea. Round-the-world racer Mike Golding endorses Go Green's message "We need to learn to understand how to change our behaviour on-shore, thousands of miles away, to keep the oceans safe and clean up the planet. This, truly, is a book "for gulls and buoys everywhere". 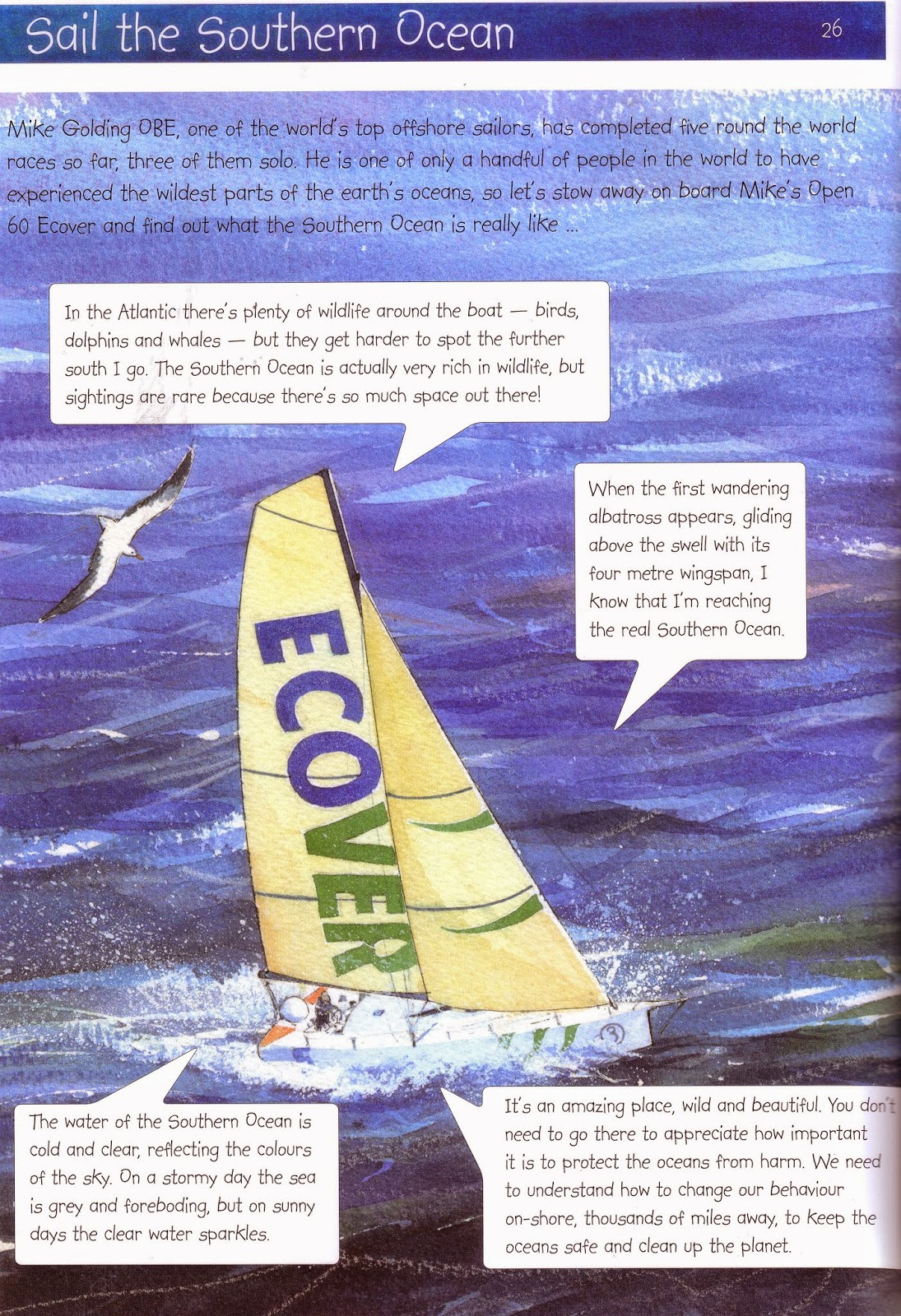 Return to REVIEWS HOMEPAGE
Posted by julia jones at 00:00 Permalink

Sounds like a good summer choice for all the family, Julia!