Stinkbomb and Ketchup-Face and the Quest for the Magic Porcupine, written by John Dougherty and illustrated by David Tazzyman: published by OUP

First of all, I have a complaint to make. This is the second book in the Stinkbomb and Ketchup-Face series, and the next one isn't out till JANUARY! My grandson whisked the first one away before I got chance to review it. Now we’ve just read this one together – but we’ve got MONTHS to wait before the next. John Dougherty, I hope you’re hard at work on the fourth. And fifth, and sixth… 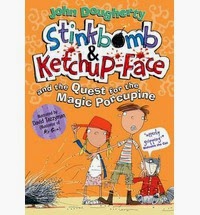 I had actually read the first one, Stinkbomb and Ketchup-Face and the Badness of Badgers, before it disappeared, but that was several months ago and I've read a lot of books since and, in all honesty, I couldn’t remember all that much about it. But there was no need to worry. Oskar had loved it, and he remembered everything. So here goes.

SB and his little sister KF live on the Isle of Kerfuffle, along with King Toothbrush Weasel and his army, which consists of Malcolm the Cat, and various other eccentric characters. (Their parents conveniently disappear when there’s a story going on.) If you noted the title, you will realise that the villains of the first book are a troop of exceedingly bad badgers. SB and KF triumph over them and they are cast into jail – but at the beginning of the second book, whilst playing Monopoly, the badgers discover a 'Get Out Of Jail' card, which they promptly use – so horrors! Once again, they are free to plan evil and wicked things, to do EVILLY and WICKEDLY.

SB and KF soon realise what has happened and determine that once again, they must defend Kerfuffle against the badgers. Fortunately, they meet a whole bunch of characters, brilliantly illustrated by David Tazzyman, who help them in their task. My favourite is the amazing Ninja Librarian, who has magic powers and also a very sharp sword, which she threatens to use to chop the heads off anyone who misbehaves in her library. She helps SB and KF to research what they must do to defeat the badgers: it involves catching a number 36 bus (which has an amiably dim – but very jolly – driver called Mr Jolly) which will take them on their quest to find the Magic Porcupine.

The story rollicks along – you never have a clue what’s going to happen next. But the best thing about it is that it’s so funny: Oskar was chortling out loud on every page. There are quirky, anarchic characters and excellent baddies. But there’s something else interesting going on: John Dougherty plays about with the conventions of a book. He does interesting things with typefaces. He tells you that SB and KF will have to wait till page 55 to find out what their quest will be – and then has the characters whiling away the time and the pages till they get there. He subverts expectations – notably with the arrival on the scene at the end of a chapter of a fearsome shark - who actually turns out to be a great help. And he reminds you all the time that this isn't real life, but a book. I’m sure there’s a proper term for this (meta-something?) but I don’t know what it is. I thought it might be a bit of a problem for a young reader, but far from it – Oskar was intrigued by and really enjoyed this aspect of the book.

So, a great hit. Right up at the top of Oskar’s personal chart, in fact. We can’t wait for the next one!