The Blade Itself, reviewed by C.J. Busby


The Blade Itself is written for adults, but it's a book that might also be enjoyed by older teenage readers, especially any who are fans of G.R.R. Martin. I picked it up almost by accident from my sister's shelf while visiting this summer. She is an extremely discerning reader of fantasy and sicfi and I always trust her judgement, so I knew it would be good. But I wasn't prepared for just how good. 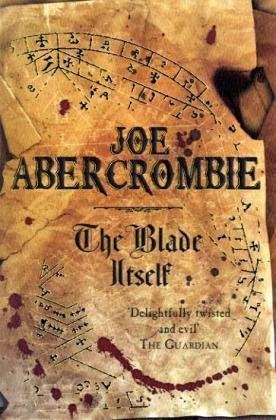 The Blade Itself is the first book of a trilogy set in an alternative world but one that is reminiscent of medieval Europe, albeit with a very different history. There are no maps, so my sense that I almost recognised the topography and names (Angland? Midderland? The southern, oriental-type empire called Ghurkul?) added a certain resonance, but also left it all nicely vague. The world is one that has a recognisable kinship with G.R.R. Martin's Song of Ice and Fire - swords, men at arms, politicking, and scepticism about the apparent reappearance of old magic. But it's not derivative - for all the inevitable resonances any epic fantasy has to other epic fantasies all the way back to The Lord of the Rings, Abercrombie's world is original enough to really engage the reader, and what's more important, his writing is cracking.

The story is told from the viewpoint of a number of different characters, and I loved all of them - whether it was bitter, twisted torturer Sand dan Glokta, vain, lazy, aristocratic Lieutenant Jezal dan Luthar, the tough northern barbarian fighter Logan Nine-fingers (also known as the Bloody Nine), the seasoned northern scout, Dogman, or the long-suffering army stalwart, Major West. Each has a distinct voice, and although the threads intertwine, each also has a distinctly interesting journey and their own sub-plots to follow, so I greeted each change of chapter/voice with the sense of excitement of catching up with a really interesting old friend.

But it's not just the characters - Abercrombie's writing is sharp, clever and above all funny. I like my fantasy laced with a decent amount of self-deprecation and deadpan humour, so for me this was the best aspect of the book. Despite some very dark moments, gritty realism and a lot of blood, it also had me laughing out loud in parts. Sand dan Glokta has a nice line in bitter sarcastic humour, while Luthar is unwittingly funny just because he's totally lacking in self-insight. Nine-fingers, as well as having the ability to eviscerate an opponent on autopilot, is master of the one-line put down. There are also some nice moments where Abercrombie subverts the usual fantasy fare - the powerful wizard who's drawn Logan down south turns out not to be the white-beaded old sage standing by the front door, but the person Logan barely glanced at - the stocky butcher with blood half-way up his arms, dissecting an animal in the yard below.

The plot follows a lot of disparate strands, all, like the characters, with their own fascination, and there's an underlying sense that all of them are going to turn out to be interrelated. There is an empire on the move in an unholy alliance with dark magical forces, a conspiracy needing investigation at the heart of the corrupt, class-ridden central Union, a wizard who apparently still lives hundreds of years after he first made an appearance in the Union's mythology, and some violent orc-like creatures overrunning the Union's northern borders. It's a full-scale adventure, and one that's very hard to put down. I had to stop after book two of the trilogy because I had my own pressing writing deadline to make, but as soon as I'm done I'll be diving into the last book.

The Blade Itself is gritty, bloody, and there's a lot of politics to keep up with, so I wouldn't recommend it to those under 16, but there's nothing that would worry the older teenager. There is a lot of swearing. But you probably hear worse on an average secondary school bus...

So, in return for all the great reads we adults have had from YA fiction, here's one that crosses over in the other direction: older teenagers (and adults), I give you Joe Abercrombie. Enjoy!

C. J. Busby writes fantasy for 7-12. Her latest book, Dragon Amber, is out with Templar: the first in the series, Deep Amber, was published in March and has been shortlisted for the Stockton Book Award..

Return to REVIEWS HOMEPAGE
Posted by C.J.Busby at 05:00 Permalink

I've just finished the last book - Argument of Kings. It's a little more adult than the other two - it would get an 18 certificate if it was a film. But hugely enjoyable!