The Wind Singer by William Nicholson - reviewed by Cecilia Busby 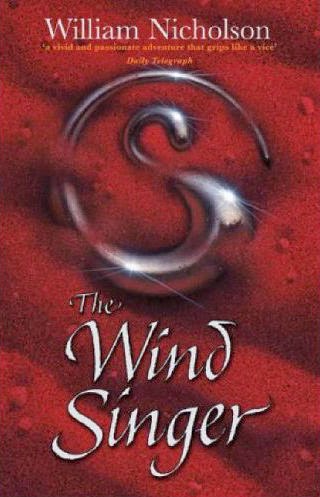 So shouts Kestrel Hath, bellowing her rage and frustration from the very top of the highest tower in the exam-obsessed city of Aramanth, near the beginning of William Nicholson's classic fantasy, The Wind Singer. In Aramanth, your family status is judged by the grades each member gets in annual exams, from the age of two upwards - and a strict hierarchy results, with demarcations maintained in the type of housing, clothing and employment granted them by the city administration. Kestrel has finally had enough - of the endless tests, of the fear they produce, of the unfairness of it all. But her defiance will seal the family's fate - they will be sent down to the lowest tier of all, Grey District, and the only way she can hope to change anything is if she sets out with her twin brother Bowman into the wilderness to find the 'voice' of the mysterious Wind Singer, the contraption left in Aramanth by the legendary Singer people, long ago.

This book was a favourite of my eldest daughter, now off at university, and I revisited it recently because my youngest (12) seemed about the right age for it. We listened to the audiobook on a long journey from Devon to East Sussex, and I was struck by the sad fact that the book is even more relevant to children today than it was in 2000, when it was published.

Near the beginning, Kestrel's brother Bowman hugs his other, baby, sister, Pinpin, with a sadness that comes from knowing today is the day of her first test. "She was only two years old, too little to mind how well or badly she did, but from now till the day she died she would have a rating." We are told that in Aramanth "life was measured out in tests. Each test brought with it the possibility of failure, and every test successfully passed led to the next, with its renewed possibility of failure. There was no escape from it, no end." Every day at school, the pupils are ranked in order of their points, and exhorted to "strive harder, and reach higher, to make tomorrow better than today".

Of course, this is a fantasy. Aramanth isn't real. But it's heart-breakingly close to the mark for so many children today, who are (according to OFSTED guidelines) expected to know their national curriculum levels for each subject, whether they are achieving above, below or on 'target' and exactly what must be done to achieve the great leap to the next minor sub-division. Even the motto they chant reminds me of the constant exhortation to strive and do better every day that we see in our current education system - my son's school's (newly coined) motto is "Dream, Believe, Achieve".

Nicholson does a great job of showing us the folly, cruelty and unfairness of such an exam and achievement-based system and the ways it sees only a certain sort of value. Later in the book, Kestrel's father subverts residential retraining classes for those adults who regularly perform badly in the exams by persuading them to write about not what they are asked but about what they know - and they all know some fascinating and valuable things that the rigid exam structure doesn't allow for.

My daughter certainly enjoyed the parallels, and appreciated the efforts of Kestrel, Bowman and their family to revolt against the Examiners, who ruled the city. But the book is about more than just that ratings system. It's about love, loyalty, the power of the imagination, empathy and keeping true to a moral centre. Kestrel and Bowman are helped in their epic journey to find the wind singer's voice by the dunce of their class, Mumpo, a lumpy, inarticulate, dribbling failure, who falls in love with Kestrel because she once sat next to him in class as part of an act of defiance. Kestrel isn't too pleased by his adoration to start with, and Nicholson doesn't spare his readers from just how annoyingly whiny, smelly and greedy the boy can be, but there are hidden depths to Mumpo, and over the course of the book the siblings learn to appreciate and love the apparently unloveable.

My daughter loved it, and I was really taken with it over again. Above all, the book is a great, imaginative and warm-hearted adventure story, which asks you to really think about what is or isn't valuable in life. As such it will live on in the minds of its readers for a long time.

Return to REVIEWS HOMEPAGE
Posted by C.J.Busby at 00:00 Permalink