THIS IS NOT A LOVE STORY by Keren David; reviewed by Gillian Philip 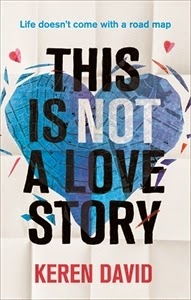 Kitty reads a lot of books. And while Kitty doesn't have a great idea of where her life is going, she does have a very particular idea of where in a fictional existence it ought to be going. But as the strapline for this energetic coming-of-age novel points out: Life doesn’t come with a road map.

In This Is Not A Love Story, Keren David plays with many of the tropes of recent teenage fiction. There’s the love triangle featuring two gorgeous prospective partners (one of them a ‘bad boy’); there’s a ‘sick-lit’ element, with Kitty’s heart in constant danger of stopping just as her father’s once did. But tropes are there to be played with, to be subverted, and David has a joyful time doing just that.

Kitty and Theo, both from North London, find themselves coincidentally moving to Amsterdam at the same time – Theo much against his will. Though they don’t know each other (surprisingly – and David is very funny and sharp when describing the tight world of Jewish North London, where everyone knows someone’s friend’s aunt and every boy has loads of friends called Jacob), they fall in with the same group of expat friends, and their attraction is instantaneous. Theo, though, is still getting over a previous romance (the cause of his exile), while Kitty wants to make quite sure he is the perfect soulmate she’s read about in so many books. The spanner-in-the-works is Ethan, an English-American but-mostly-Dutch boy who may soon become Kitty’s stepbrother. He’s acerbic, he’s blunt, he’s cynical, and Kitty doesn’t know what to make of him – except that, impending family ties notwithstanding, he’s certainly beautiful enough to qualify as another potential love interest.

Keren David herself spent time as an expat in Amsterdam, and her affection and admiration for the city are vividly expressed as Theo and Kitty explore their new home. She’s also very good on the expat existence, where friendships are almost always fleeting, but there’s a will to experience intensely a new and short-lived home. And for both Kitty and Theo, that intensity is ramped up to a pitch that teenagers need, dread and want. “Love has to be passionate,” Kitty insists, “it has to include fear and hate and longing.”

While searching for her glittering drama of true love, Kitty perfects her life online, through YouTube vlogs and Tumblrs and her Instagram, where she constantly checks her (rising) follower count. It’s the contrast between her ideal Instagrammed life and the real one that creates much of the tension (as well as the fun) of the book.

The story does not play out as you might expect (and paradoxically, that’s just what Keren David fans will expect). As well as the romantic triangle, there’s a central nail-biting mystery, and a broad cast of characters who stay lodged in your memory. Teenagers who love John Green but are looking for something a little different will love this book. And just to be clear, there’s not a single scene involving a snog in Anne Frank’s attic.


Return to REVIEWS HOMEPAGE
Posted by Gillian Philip at 00:01 Permalink

Thanks for this review!