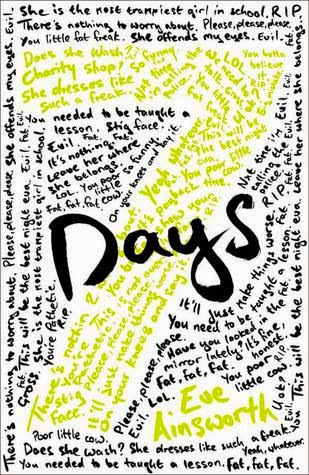 Jess is fourteen. She lives with her mum and younger sister, Hollie, on a housing estate and nothing is easy for her.

Then there's Kez. On the surface, she's got everything Jess wants: a pretty face, a hot boyfriend, nice house, two parents. Most of all, Kez has power, at least when she's at school. And she uses that power to make Jess miserable.

Over the course of seven days, the two girls' lives are tangled together until everything comes to a head on Saturday night and nothing will ever be the same again. How far is Kez prepared to push Jess? Does Jess have enough strength left to push back?

Seven days is an original and clever concept: a dual narrative following victim and bully over just one week (which feels like a lifetime when you're young). At the start of the story, the bullying has been going on for some time and Jess is really struggling to cope. My sympathy was instantly won as I took in her difficult home life and daily battles. Then Eve Ainsworth smartly flipped things around and retold events from the bully's point of view. From that moment on, I was torn between the two girls - on one hand, I was willing Jess to ask for help, to tell someone what was happening, to stand up for herself but on the other, I was desperate for Kez to get the support she needed too. It was a bold move to recount the same action twice but it works perfectly and for me, it's the strongest part of the book. It really made me think about events from both points of view and reminded me that bullying is never just about the victim - it says a lot about the bully too, how they're often damaged as well. Each character had their own distinct voice, ringing with authenticity and perfectly observed. Both leapt off the page and there was a host of supporting characters who were equally brilliant.

I predict teachers and teens alike will love this book. An important and thought-provoking debut.

Published by Scholastic, February 2015. I recommend it for readers of twelve years and up.