THE DISAPPEARANCE OF TOM PILE, by Ian Beck. Reviewed by Saviour Pirotta 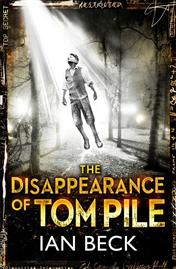 I have to admit that I've always been a big fan of Ian Beck's work. His picture books have a pastel-hued retro quality that is very comforting and were always a hit with the kids I bought them for.

I also loved his Tom Trueheart novels, firmly based in a fairytale world that seemed reassuring in its familairity but innovative at the same time.

His latest series, called The Casebooks of Captain Holloway, is yet another facet of his ouevre. I've just finished the first installment, The Disappearance of Tom Pile, which I devoured in one long sitting. If Stephen King were to write a children's book this would be it. It has all the ingredients of a bestseller and a resonance that will stay with readers long after they have finished the story. Here is a tight plot with engaging characters, set against a well-researched backdrop of World War II.

In 1900 a boy called Tom Pile is out poaching with a local miscreant. They shoot and wound a white stag, a rash action the boy regrets in an instant. He rushes to the wounded beast and seconds later, a dazzling light from the sky whisks him up into the air. He returns to earth what he thinks is a few moments later but is in fact 1940, right in the middle of World War II. In his pocket is a rectangular piece of metal unlike anything that has been manufactured anywhere on the planet...

I can't reveal what happens next. Suffice to say that a whole list of diverse characters gets involved in the mystery.  A corporal with 'special' powers, a charismatic captain who is also an investigator of paranormal phenomena, a German spy and a heroic Polish soldier. Or is the latter a secret spy for the nazis...?

The story is told in the first person by the corporal, a londoner called Jack Carmody, and includes files and transcripts in the style of King's celebrated Carrie. The ending is incredible!

The book also includes a peek into the next adventure of Carmody, Holloway and Tom Pile. It's called The Miraculous Return of Annick Garel. Can't wait to get my mitts on it.

My next book THE GHOSTS WHO DANCED is out on the 3rd September.


Return to REVIEWS HOMEPAGE
Posted by Saviour Pirotta at 06:00 Permalink