This isn't just a GOOD book - it's a VERY GOOD book. I'm quite certain of this, because I've read it twice. I read it when I first got it, but stupidly didn't write the review of it then; so today I had to remind myself of it - and was soon engrossed, and read it the whole way through again.

The novel concerns a time-traveller, Rab. He is from the future - a future where space is at a premium, but people live contentedly together; in part because something is put in the water to depress their sexual and other urges. They are protected against the harsher realities of life; they feel no pain, for instance, because each person has a sort of technological guardian called a Com, which protects them and sorts out any problems or glitches.

Rab's mother gives him the latest gadget - a Silver Skin - which will enable him to travel into the past and get lots of useful information for his research project. He decides on the 19th century, but a violent storm interferes with navigation, and he finds himself much, much further back - in Skara Brae, at the point where the Stone Age gives way to the Bronze Age. 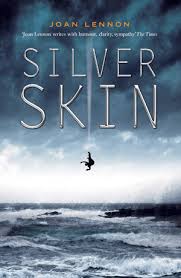 The story is briefly, but cleverly framed in the 19th century, but the heart of it is in the Stone Age, and in the relationships between Rab, a girl called Cait, and a formidable wise woman called Voy. All these characters are beautifully drawn. Rab and Cait are both, in a sense, outsiders. They are drawn to each other, but - given the circumstances - things are not easy between them. Voy is easy to dislike, but we are shown what her life has been, and how much she misses her man, Gairstay, and so we begin to understand her. The book is suffused with a sense of the place in which it is set; the villagers think that Rab is a selkie, half-man, half-seal, and the sea is a constant presence.

The writing is lovely. Here's one little example. This is the 19th century; there is a storm, and Mrs Trevelyan is unable to sleep: "She watched the little flame thrashing on the candle wick and waited for the morning." Thrashing is not a word I would have thought of using, yet it paints the picture of the flickering flame far more effectively than guttering, or indeed flickering - both of which would have been more obvious choices. And the sentence is just beautifully balanced; it works so well.

The earth is entering a cooler phase, and the people are afraid. Without the sun, they cannot perform the ceremonies that enable the dead to depart in peace; they are aware that things are changing, and that the future may be worse than the present - which, of course, has resonances for us. Is the solution which has enabled humanity to survive into Rab's age a viable one for us - would we be prepared to accept the sacrifices it entails?

This really is a book which satisfies on a great many levels. It would be great to study in class - if the curriculum allows!

Return to REVIEWS HOMEPAGE
Posted by Sue Purkiss at 03:00 Permalink

Have just collected my copy from local Waterstones, and looking forward to reading it - especially after this great review.