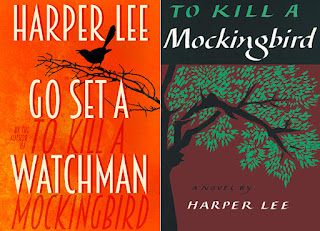 From the jacket.....
Maycomb, Alabama. Twenty-six-year-old Jean Louise Finch—"Scout"—returns home from New York City to visit her aging father, Atticus. Set against the backdrop of the civil rights tensions and political turmoil that were transforming the South, Jean Louise's homecoming turns bittersweet when she learns disturbing truths about her close-knit family, the town, and the people dearest to her. Memories from her childhood flood back, and her values and assumptions are thrown into doubt.

The publication of this book (and the controversy surrounding both it and Lee's life) can't have escaped anyone's notice. Written in the 1950s, Lee says that she always saw Go Set A Watchman as a companion book to To Kill A Mockingbird. In fact she wrote them both at roughly the same time, but actually submitted Go Set A Watchman to her publishers first. Somehow the manuscript was lost and it was not re-discovered until late 2014 when publication was initiated. The book has been packaged as an adult book but, with To Kill A Mockingbird still firmly on the National Curriculum, I can see how Go Set A Watchman could neatly fit into the shelf of books that are recommended to young adult readers in their later teens. I think they should read it, not because they should study it, but because they should simply read it and make their own decisions.

The language is often shocking (and there is frequent use of the N word) and the issues covered are powerful and controversial (including incest, murder, extreme racism, and gender subjugation) and so I'd recommend that parents and teachers read it first before recommending to younger teens. Over-study can ruin a book, but this could easily be offered to young adults who enjoyed To Kill A Mockingbird and want to know what happened next. I was one of those young readers who was forced to analyse every tiny detail of To Kill A Mockingbird in school, and therefore I had a somewhat jaded image of Lee's writing and I wasn't going to be influenced by the hype and buzz surrounding the publication of Go Set A Watchman. In fact I wasn't prepared to enjoy it, but I did.

The book is actually quite beautiful, but in a deeply sombre way. Jean Louise's story is enigmatically portrayed and the prose draws you in from the start. None of your rigid "show, don't tell" here as we are told of Jean Louise's world and we accompany her on her journey back to her childhood home via highly descriptive flashbacks. Atticus as an old man is not the person we think we knew when we met him back in To Kill A Mockingbird, but it turns out that we only knew him through the eyes of an eight year old. Scout is grown up and now we meet her as Jean Louise, and the rosy-glow of her remembered childhood gets grubbier and more brutal page by page.

She arrives in her home town to visit her elderly father two years on from the death of her brother, and now sees everything through the filter of her adult eyes and perceptions. The truths she uncovers are far from new to a reader with any knowledge of the period and location, and one does wonder how a well educated young woman like Jean Louise has been able to ignore the glaringly obvious up till now. How Jean Louise reacts to these revelations about her home town creates a deeply sad reminder of how we should never go back, and of the dark shadows that can lurk in our history.

There are some passages that feel rather tiresome and over-explanatory, and in places the book does feel like it needs a good broom-sweeping editor. I'm not convinced that most readers will enjoy some of the longer chunks of scene-setting explanations about how Alabama and its overlapping families fitted into the Civil Rights Movement. It seems that Jean Louise does need these things pointed out to her (in fact the men around her take a lot of time to patronise her and to point out that she knows nothing). It is possible that teen readers (who may not yet have studied the background of the American Civil Rights Movement and the NAACP) will find these passages more interesting and enlightening, but to me these sections feel as if they hinder the smooth flow of the story. I would have liked the history to trickle out via the plot, and not by long wordy explanations.

All in all I felt drawn in to Jean Louise's world and I wanted to return not to her adulthood, but to her childhood naivety. I suspect we have all had those moments in our lives when we are hit with the reality of something we never noticed before, or perhaps a truth that we never wanted to admit. Even though the experiences that she has are (thankfully) a world away from those most of us will go through, the melancholy remembrance of lost halcyon days is perhaps something we all share.

Return to REVIEWS HOMEPAGE
Posted by Dawn McLachlan at 07:34 Permalink

That's a really useful review, thank you, Dawn. It's one of those books I couldn't quite decide whether or not I wanted to read ... and now I do, but nicely forwarned.