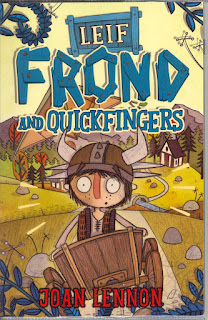 LEIF FROND AND THE VIKING GAMES

Leif is the youngest and smallest member of a large family of Viking farmers. His ambition is to be a hero - an aim constantly thwarted by others, in particular his elder sister Thorhalla who always needs help with the laundry just when he wants to do something exciting. Leif would much rather spend time with Queue the Artificer, the clan's inventor. And in Quickfingers Leif and the inventor help to outwit and capture a thief and solve a mystery - in a story with a surprisingly complex plot that keeps you guessing right to the end.

In The Viking Games Harald Blogfeld arrives in a longboat with his band of Viking raiders to take part in the Midsummer Games. Harald is looking for a replacement crew member, and all the young men of Frondfell are keen to show off their strength - including Leif. Also on the lookout for a replacement - a husband, in this case - is the formidable Widow Brownhilde, who has her sights on Leif's father. Can Leif see off the widow and win at the Games?

I'd never read one of Joan Lennon's books before, but I always enjoy her blogs and other writings, so when I came across Leif Frond and Quickfingers in my local library I immediately grabbed it. I was not disappointed. These short books are a lot of fun, with nods to James Bond and chapter titles like "Woad Rage". Tucked in amongst the mayhem is quite a lot about life as most Vikings lived it - not longboats and raids, but farming and storytelling and mixing dye. The combination of adventure and word-play will entertain older readers as well as the youngest. And with so many promising characters bumping into each other at every turn, a series must surely be in the offing? Let's hope so.

Return to REVIEWS HOMEPAGE
Posted by Ann Turnbull at 12:43 Permalink