I'm not a natural target for a book for children/young teens about pony-riding. There's the obvious quibble about it being rather more than a year or two since I was in hailing distance of childhood; but quite apart from that, I know very little about horse-riding. I did have a bout of enthusiasm when I was about twelve. This entailed reading Black Beauty and books by Jill Pullein-Thompson, and avidly studying instructions in comics about how to harness/groom/get onto a pony. Eventually I saved my pocket money and went for a lesson. I knew how to mount - of course I did. I'd read all about it. So how come I ended up facing the pony's tail?

It all went downhill from there. Instead of galloping across the moors (which would have been tricky in the South Derbyshire coal fields even if I knew how to gallop), the pony and I plodded unenthusiastically along the road for half an hour, then came back to the stable and said our farewells. Both of us knew this relationship was going nowhere. 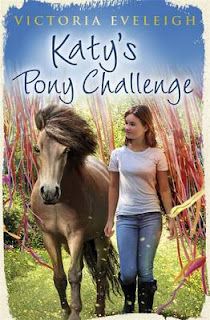 Despite this unpromising back-story, I really enjoyed reading Katy's Pony Challenge. It helps that it's set on Exmoor, an area that I'm familiar with and that Victoria Eveleigh knows very well, as she lives and farms there. Reading the book was rather like having a mini holiday there - little details place you firmly in the landscape: Crystals of crunchy snow lingered among the gnarled, charred heather... At the top of the ridge they stopped to let Jacko get his breath back. Sweat had turned his dusty winter coat into slick, feathery curls, and he stood steaming in the ice-cool breeze.

It's a story about friendship, and about finding the things you're good at. Katy's friend Alice has been given an expensive new competition pony, and there's an expectation that she will become a successful and very competitive show jumper. Katy is pleased for her - and perhaps just a touch envious - but she soon begins to notice that Alice does not seem quite as enthralled as she should be.

Katy is also concerned about her Exmoor pony, Trifle, who has recently had a foal. Katy had found Trifle on the moor in a sorry state, and convinced her father to take the pony in. This means that there are now three ponies for Katy to look after - too many; Trifle needs more exercise than Katy has time to give her, and the foal, Tinks, needs to be trained. Then a newcomer to the area, Olivia, asks if her autistic son, James, can spend some time with Katy and the ponies - he's naturally drawn to horses, she says. He and Trifle quickly develop a bond. But for Katy, he's yet another responsibility.

But then she comes across a new way of schooling horses. It's called horse agility, and it requires a very different way of relating to them. James turns out to be remarkably good at it, and Alice is very drawn to it as well. Perhaps this will be the means by which they will find a solution for all their problems...

Any young person who's keen on horses will love this book - I know my daughter would have devoured it when she was younger. Just a word of warning; it's the fourth in a series. It's fine to read by itself, but you might want to buy all four!


For more book reviews, see my blog, A Fool On A Hill