The King of Space by Jonny Duddle - reviewed by Damian Harvey 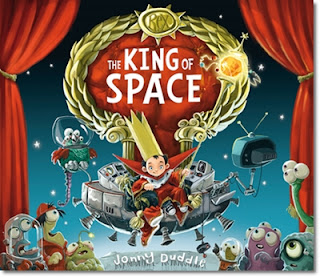 The King of Space, written and illustrated by Jonny Duddle, has been around for a little while now but it's a book that I missed - and perhaps you did too. Whilst visiting libraries to help promote the Summer Reading Challenge - as well as talking about my own books I also spent time with children to help them choose other books that they might enjoy reading. The King of Space caught my eye and proved to be a very popular choice with readers that were looking for something fun to read but felt reluctant to jump into a bigger book.
The King of Space was a perfect choice - especially boys who loved the story, artwork and the format of the book itself. The only thing that might have put them off is that that i found the book placed amongst all of the other picture books so it tends to get missed. While King of Space is a picture book - for me it is one of those real gems... a picture book for older readers.
Rex isn't really a naughty boy. He's just a normal boy with big ideas who is tired of living a boring life on Mum and Dad's Moog farm. While all of the other children/aliens at school have little ideas about what they want to be when they grow up, Rex bravely declares that he wants to be the 'KING OF SPACE!' Naturally, all of his classmates laugh at him but Rex is determined to see his plan through.

With the help of his mechanically minded friend, Blip, Rex builds a huge 'WARBOT' that will enable him to achieve his goal. Then one night whilst Mum and Dad think Rex is having a sleepover at his friends house, Rex and his Warbot 'crush all resistance in the Western Spiral' and Rex declares himself King of Space. And just to be 'on the safe side' he kidnaps Emperor Bob's daughter.
As you can well imagine, the Emperor and the Intergalactic Alliance aren't happy with Rex's behaviour - he's been a very naughty boy - so a huge fleet of spaceships converge on Rex's house. Rex does the only thing he can an rushes in to tell Mum and Dad what he's done and that he doesn't want to play anymore. It is, of course, all left to Mum to sort out the trouble. But is this an end to Rex's plans???

The picture book/comic book style of this works very well and it certainly has plenty of appeal for older readers. There is lots of humour that will appeal to the older readers too, whilst also striking a very familiar chord with adults.

The King of Space is lots of fun and it's a book I will be recommending again.

Damian Harvey can be found at www.damianharvey.co.uk
Twitter @damianjharvey


Return to REVIEWS HOMEPAGE
Posted by Damian Harvey at 10:06 Permalink

That book looks a lot of fun!

I really enjoyed it Penny, and as I said, I'm not sure how I missed it when it came out. The artwork is great and so is the story. It really is a lot of fun.