FIVE CHILDREN ON THE WESTERN FRONT by Kate Saunders, reviewed by Pauline Francis

I know that Kate Saunders is a huge fan of E. Nesbit’s classic Five Children and It so – in addition to the fact that her novel won the 2014 Costa prize and has been short-listed for this year’s Guardian Fiction Prize – I wanted to see how she would weave these two books together, especially since I didn’t enjoy the original. 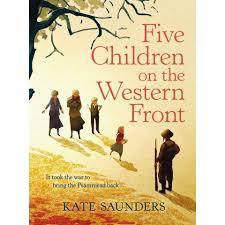 The Prologue begins in1905, when the Psammead (an ancient sand fairy) takes Cyril, Robert, Anthea and Jane twenty five years into the future (1930) to meet their old friend, the Professor. It’s only when they’ve left that Anthea wishes that she’d looked at his photographs more clearly. She remarks: “I didn’t see any grown-up men who looked a bit like you boys – I wonder why not.”

She doesn’t know that the Professor is crying after they’ve left – and so am I!

This story is wonderfully done. The Psammead re-appears just as the First World War is breaking out. By this time, Edith, aged nine, has been born and she is our link to the original story.

“Everything interesting happened before I was born,” Edith sighs when she sees the Psammead for the first time. She’d heard the wonderful stories of magic and flying adventures from her older siblings. And what about this marvellous sentence? Edith again: she could almost smell the wave of magic that had suddenly swept into her life and the bigguns almost forgot they were grown up.

How the reader wishes those children hadn’t had to grow up. The tone of the novel slowly darkens as Cyril is sent to France, thinking that the war will soon be over; followed the next year by Bobs and then Anthea as a nurse at the front. The war goes on and on, as does the Psammead’s stay with the family.

The tour de force of this novel is the back-story that is given to the creature – “I’m a senior sand-fairy, not an animal!” he protests. A complicated and humorous investigation by the children in the British Library reveals that this grumpy sand fairy was once a desert god who had killed thousands of people. He snaps, ‘I don’t know how many of them died. Numbers aren’t important.’ Who will forget the vision of the skeleton, pointing with its bony arm at the Psammead, crying, “REPENT.”

This is a marvellous device, weaving the Psammead’s predicament with the terrible war, which comes to the reader through letters, home leave and occasional flying visits, with the Psammead, to the Western Front. Before the poignant ending, Cyril asks the sand-fairy, ‘Since when have you cared about dying?’

In this brilliant anti-war novel, there is no attempt to imitate E. Nesbit – just pages full of humour and pathos, peopled by characters who are individuals that we care about, and whom we desperately hope will survive the war.

It is the Psammead in the end who sums up war. “Wars never change. It’s basically two sides trying to kill each other.”

The Epilogue, set in 1930, in which we meet Anthea’s daughter, assures us that “once magic is with us, it never disappears.”

Do I need to tell you that I’m now reading Five Children and It? 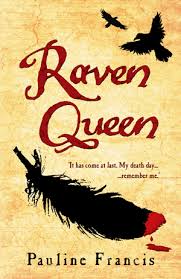 I loved this book too - having been a great fan of E Nesbit's original series I was intrigued by this one, and couldn't put it down. As with the originals, it was by turns funny and exciting, but with our own knowledge of what was in store for them all between 1914 and 1918 it was impossible to escape the underlying sense of foreboding. Brilliant!