THE WILD SWANS by Jackie Morris Reviewed by Adèle Geras

"It was a book so beautiful that she felt at any moment the painted characters would leap out of the pages and come to life."

So says Eliza, the brave and resourceful heroine of Jackie Morris's THE WILD SWANS. That sentence sums up my feelings about this retelling of one of my favourite fairytales.

Anyone who reads my reviews regularly will know that I always say, right up front, that I know this or that writer; that I can't help it if some of my best friends write super books and so on. With Jackie, I can truthfully say that I've only met her once briefly in person. But she's a Twitter chum and anyone who takes part in that online cocktail party will know that such relationships can be a great deal of fun. I have followed Jackie and because I've been an admirer of her work for years,  I did actually ASK to review this book.

I had another reason for doing this. It's this: I myself wrote a version of this fairytale for David Fickling's collection of stories, which sold for £1 each back in 1998. My story was called THE SIX SWAN BROTHERS and it was beautifully illustrated in black and white by Ian Beck.

There are twelve swans in Morris's version. The whole book is so beautifully produced and presented that it's worth pausing to pay tribute to those who made the decision to publish it in this format. It's a square-ish hardback, with full colour illustrations and turning every page is a pleasure. 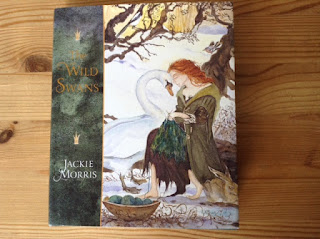 Morris has written the text as well as providing the haunting illustrations. I am always deeply envious of anyone who can do that. It seems to be the most perfect way of creating a book and here the writer has managed to produce such a rich story,  so full of pleasurable language that actually, it would be possible to read it with no pictures whatsoever and still have the images in your head. Take, for example the painting below. It shows Eliza after she's been enchanted by the White Queen. 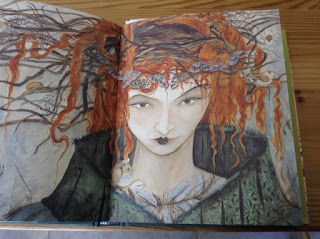 The text reads thus: "...the queen now pulled and backcombed and filled her hair with things.  Eliza saw jewelled combs where there were only tangled twigs and thorns and ragged nests of birds."

And yes, the picture adds to the words but they are poetic and vivid in themselves, even without the help of an illustration.

The story is well known to many  in one version or another. What Morris adds to it is nature and detail. The story is told at much greater length, with many more layers of story for  readers to enjoy. It's told well, with good pacing and gorgeous choice of language. I've also tried reading the text aloud and that works very well, so I hope there will be an audio version. Morris is one of the best illustrators of  creatures: bears, cats, birds and hares. She shows us the world as a beautiful place but also one where cruelty is constantly present, always there waiting to catch us unawares.

In this book, the two creatures who matter are a dog and a hare. Shadow is Eliza's companion and friend. She is a big, grey, skinny animal, but also very gentle and loving.  The White Hare,  (the animal embodiment of the Queen who turned Eliza's brothers into swans) is both sinister and lovely. And the swans themselves are magnificent: white and powerful and crowned with gold. 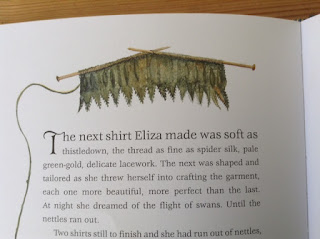 This book will doubtless appear in paperback in the fullness of time but  the very competitively-priced  hardback  would make the most wonderful Christmas present for anyone who loves fairytales, and nature and the joys of holding in their hands something that will go on giving pleasure for years and years. John Keats said it and he's quite right: A thing of beauty is a joy for ever.

Bless you and thank you Adele.

A lovely review - after reading this, who would not want to go out and get it?

Jackie, if you read this - congratulations! What a wonderful choice of story, and your illustrations are as beautiful as ever.
Adele - thank you for bringing this to my attention.